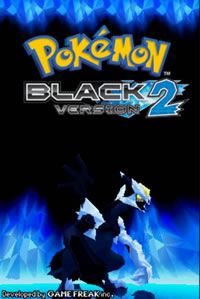 Pokémon Black and White Version 2 are the final core series titles of Generation V. They are direct sequels to Black & White, and at this point are the only direct sequels in the core series. Although these games don't bring any new Pokémon with them they do expand the Unova Pokedex to include 300 Pokémon, the supplement over Black & White being the inclusion of Pokemon from earlier generations. Like Black & White before them these games enjoy minor enhancements when played on the DSi or 3DS (when compared to playing them on a standard DS).

These titles were announced on the international and Japanese versions of the official Pokémon websites on Februrary 26th, 2012. On that same day Junichi Masuda announced them on Pokémon Smash, a Pokémon TV show that aired on Japan's TV Tokyo network.

Two years after the events of Black and White we see a New, Bigger Unova, with three new Gym Leaders and a New Champion, expanding the Pokedex to include all Pokémon who are foreign to the region. The player beings in Aspertia City this time, receiving their starter Pokémon from Professor Junipers Assistant, Bianca, they are encouraged to go on a Pokémon Journey to defeat the Pokémon Gyms and ultimately the Pokémon League. Hugh, a friend of the player, will accompany them on some occasions, he is the Rival of the player but they don’t pursue the Pokémon League dream, they want to free a Pokémon that Team Plasma kidnapped.

Through their Pokémon Journey, the Player and Hugh will find previous members of Team Plasma, alongside Colress. Zinzolin, one of the seven Sages appears as an antagonist, while former sage Rood will help the player.

Zinzolin at a certain point freezes Opelucid City in ice helped by Kyurem and machinery. The player now has to defeat Team Plasma and their new leader Ghetsis to free Kyurem. Ghetsis will combine the power of Kyurem with the legendary Dragon befriend by N, his son, two years earlier and force Kyurem to fuse with either Zekrom or Reshiram. After Kyurem is saved and Team Plasma is disbanded, the player will be able to face The Elite Four again and win the Pokémon League.

After this happens, many parts of Unova are accessible such as the Skyarrow Bridge. Other Pokémon that are not native to Unova become available and Zekrom/Reshiram and Kyurem will reveal themselves to the player, once caught the player will be able to fuse them to change Kyurem form at will.

Anime Season's which loosely tie in with Black & White Version 2 (in terms of locations, NPCs such as gym leaders and Pokémon)

Two powers combine...A new legend arises!
Set off on a new Pokémon adventure to save the Unova region! You and your Pokémon can accomplish anything together!

As the direct sequels to Pokémon Black and White, Pokémon Black 2 and White 2 take place in the same region, but bring out many new changes to the plot, graphics, areas and gameplay, along with the addition of few features.

Changes to the plot


Changes to the Graphics and Areas

Pokémon Black 2 and White 2 feature the same Pokémon from the previous versions, with the addition of two new forms for Kyuurem, which are the Black Kyuurem form for Pokémon Black 2 and the White Kyuurem form for Pokémon White 2. The Unova Pokédex now includes Pokémon from the other regions, which is showcased through the Swarm Pokémon, Tradable Pokémon and Legendaries available in Unova. Moreover, Just like Black and White, the sequels too, have exclusive Pokémon to each of them.


There's an additional trade option available, that allows the player to get a variety of Pokémon, depending on their character gender and after fulfilling certain conditions. In Nimbasa City, there's a character that keeps dropping their items away. As the player finds them, they contact them and meet them to retrieve the item. Upon restoring the tenth item, they'll add the player on Xtransceiver. after calling them 51 times, the player should wait and call them the next day. they'll inform them they want to trade their Pokémon for any other one, trading a Pokémon a day. As mentioned earlier the Pokémon received would depend on gender and they are as follows:

Check out our guide: The Legendary of Pokémon Black & White 2 if you need some help finding and capturing all of the legendaries.

The Unova Region remains for the most part as it was in the original Black & White games, click here for more general info on Unova. 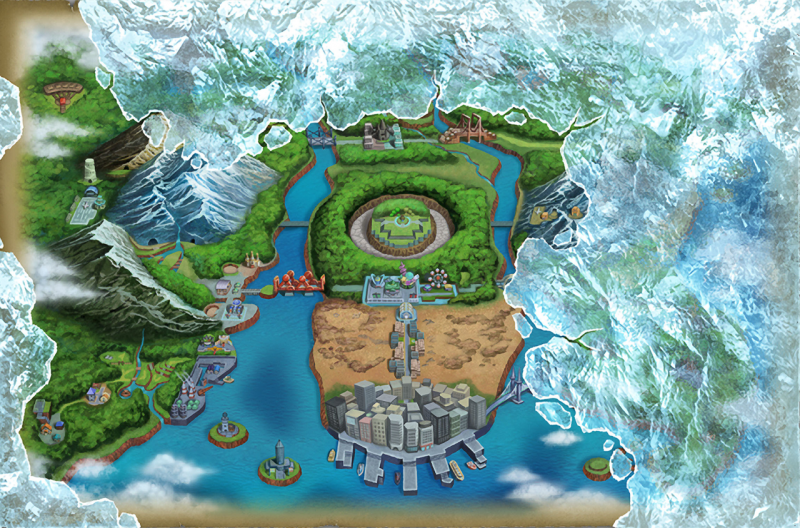 Unova being engulfed by a sheath of ice, part of Ghetsis' plan in these games is to use Kyurem to freeze the whole region. 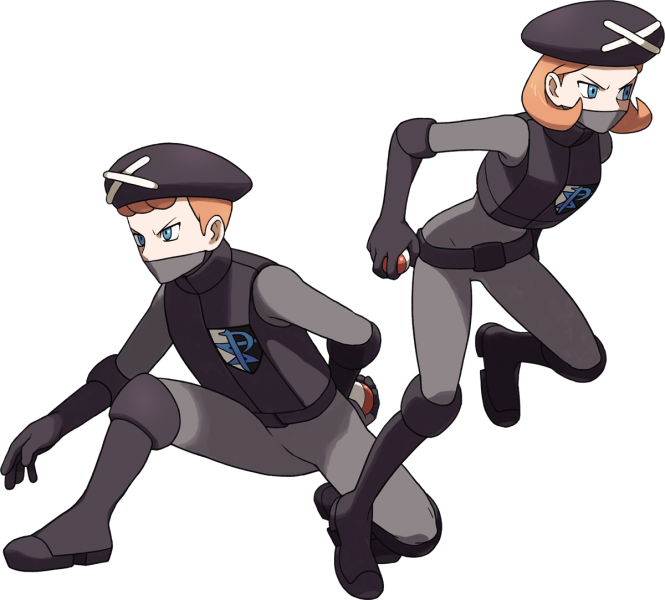 It's the evil organization of Unova, which was thought to be completely wiped out during the previous games' events. Team Plasma reappears but divided into two opposing branches. One branch is led by Ghetsis who aims to use Kyurem to freeze the Unova region and gain control over, while the other branch is led by his son, N, who's still compassionate and wants to help Pokémon and stop his father's evil plan. Team Plasma also has a new executive known as Colress, who 's a Pokémon researcher that seeks to unlock the Pokémon's ultimate power.

Since the original version of Black & White which was set 2 years prior to Version 2 there have been some changes to the gym leaders in the Unova region, with some gym leaders either passing on their positions to others in order to progress, and some just outright retiring from the Unova Gym Circuit.

The Elite Four & The Champion

Just like the previous titles the Elite Four of Unova can be faced in any order, the people you will face and their specialisms are unchanged from the original Black & White games. You've got tougher since you first took them on two years prior, but so have they, expecting a greater resistance than you did the first time you took them on. Also Alder has moved on and there's now a new champion, and it's someone you might just recognise from the previous games.

Both sequels are compatible with Pokémon Black and White, along with the rest of the games from the same generation that use the GTS (Global Trading System). They can also be linked to games from the fourth generation, like Pokémon HeartGold, SoulSilver, Diamond, Pearl and Platinum. This allows the transfer of Pokémon from the fourth generation games to Black 2 and White 2, while the reverse process is impossible. Furthermore, the games can be linked to Pokémon Dream Radar, which allows the transfer of all the rare items and Pokémon found in there.

Check out these videos of the second versions of Pokémon Black & White.

The Special Anime Trailer for B&W V2, designed to give the aspiring trainer an intro to the universe B&W V2 are set in

- They are the only direct sequels. Gold & Silver were at one point in their development intended to be direct sequels to Gen I but they never followed through on it.
- The player starts out in a city, instead of a town for the first time in the series. (and only time, to date.)

- They are the first paired version of core series games that don't have version specific exclusive Pokémon, the only difference being its form.
- Pokémon Day Care is not accessible until the player enters the Hall of Fame.
- For a first in the series, the game mascots cannot be caught without trading prior to the player entering the Hall of Fame. They also can't be caught during the first encounter with them.

Pokémon Black & White Version 2 sold a total of 8.52 million copies and netted 435 million USD in sales. It was the first time we'd seen Pokémon games get direct sequels so it was interesting to see how that would affect sales, and in short B&W Version 2 sold more combined copies than any of the 'third' games of a gen like Platinum, Emerald, Crystal etc. They sold less copies than popular remakes such as HeartGold and SoulSilver, Omega Ruby Alpha Sapphire and so on.

I believe the reason for this is firstly that a) Black & White sold less copies than all the other gen's main series paired titles, that didn't help. b) They are SEQUELS, so we've just eliminated 90% of the world that didn't already play Black & White, as I don't know about you, but I don't know many people who would buy a sequel to something they hadn't played the first version of. So all in all, converting over 50% of the fans who bought Black & White to buy Black & White 2 is far from bad going. 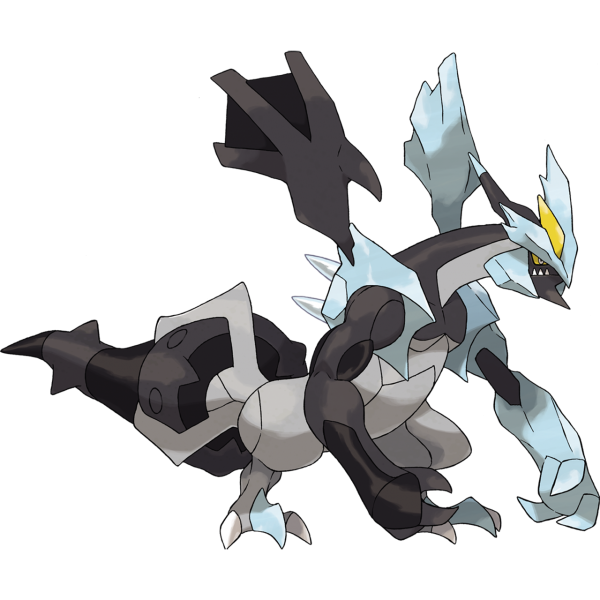 Black and White's second renditions garnered interesting responses from critics and users alike in terms of their reception in comparison to the original B&W titles, with IGN actually praising them and rating them higher than the originals, but the review aggregation sites showing the second versions with lower average scores than their predecessors.