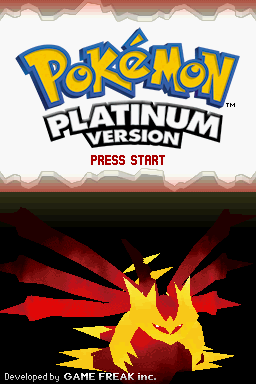 Pokemon Platinum for the Nintendo DS is a Generation IV title that acts as the 'third' or sister title to Pokémon Diamond and Pearl. Like most third game Pokémon setups the gameplay is largely similar to that of it's sister games but contains enhancements and new features. Of particular note would be the introduction of the Distortion World and an update of the local Sinnoh Pokédex. The Legendary mascot for Pokémon Platinum is Giratina who is a ghost/dragon type Pokémon.

The first the world saw of Pokémon Platinum was when a leaked cellphone image from a yet-to-be-released issue of CoroCoro magazine got circulated around the internet on the 11th of May 2008; four days later that issue of CoroCoro was officially released and on that same day (May 14th) Nintendo officially announced Platinum as the next title in the Pokémon series for the Nintendo DS.

While watching the TV the player finds out that Professor Rowan is back on Sinnoh, their best friend Barry bumps in and both go to route 201 to try to snatch a Pokémon from the Professor, he and his assistant who is either Dawn or Lucas depending on the player chosen gender see them. They don’t have endearment words as they both put themselves on danger; the professor gives them the choice to pick among three Pokémon, the Sinnoh starters:


Barry picks the type advantage Pokémon and changes from Best friend to Rival! As expected they battle and after the battle they go to Lake Verity where they meet Cyrus, once they go back to Twinleaf the player Mom would give them a pair of Running Shoes so the player can Dash into Sandgem Town. Rowan give the player a Pokedex and their journey starts right away, exploring Sinnoh in order to defeat all the Gym Leaders to earn the right to challenge the Elite Four thus becoming the Champion of Sinnoh after defeating them.

Team Galactic is on the lookout though, Cyrus its leader, is trying to overwhelm Sinnoh with the power of Dialga and Palkia, however Uxie, Mespirit and Azelf appear and Giratina pulls Cyrus down to the Distortion World, facing Cyrus, the player is then forced to battle Giratina.

After defeating the Elite Four, the player has many things to do, such as expanding their Pokedex by getting Pokémon that were previously unavailable, the use of the Poke Radar, exploration of the Fight, Survival and Resort areas, and the Mighty Tall Battle Tower where the player will be exposed to harder battles. Looker will be on the lookout back to ask the player for help to Arrest Charon and put a stop to Team Galactics plans once and for all.

Anime Season's which loosely tie in with Platinum (in terms of locations, NPCs such as gym leaders and Pokémon)

Another world has emerged in the Sinnoh region...
...A world where time and space are altered! Catch, train, and battle your favorite Pokémon, and discover ancient, mythical Pokémon in this exciting new adventure!

Pokémon Platinum introduces various changes and additions, similar to all the third games of each generation. These changes and new features are applied to the graphics, sounds, plot, gameplay and areas. 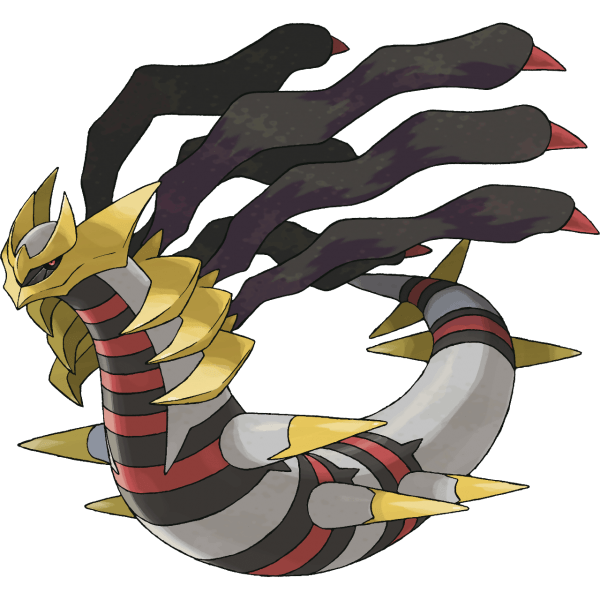 Giratina in it's origin forme

Changes and additions to the graphics and sounds


Changes and additions to the plot

Changes and additions to the gameplay and areas

Similarly to Pokémon Diamond and Pearl, the game features the Pokémon up to the fourth generation, with the addition of 59 to the Sinnoh Pokédex, which now counts 210 Pokémon that the player needs to encounter, in order to unlock the National Pokédex. Moreover, Pokémon Platinum also has Pokémon which are exclusive to it along with the addition of new forms to few special Pokémon. The Swarm and Roaming Pokémon features are still available, with a change to the roaming ones. Last but not least, the game mascots of Diamond and Pearl, along with Giratina, can all be captured, with the addition of few other legendaries.

Pokémon exclusive to Platinum: In the fourth generation main games, these Pokémon can only be obtained in Pokémon Platinum.


New Pokémon forms: The forms concept allows the Pokémon to change their visual appearance, abilities, skills and even their stats.


Roaming Pokémon: These are the legendaries that start roaming the Sinnoh map, after their respective events are triggered. They will be encountered randomly in the tall grass.


Tradable Pokémon: The list of the Pokémon acquired through in game trade is still the same as Pokémon Diamond and Pokémon Pearl.


Swarm Pokémon: Similar to Pokémon Diamond and Pearl, the player can talk to their rival's sister in Platinum, who'll inform them, each day, of a different Pokémon swarming a certain area. These Pokémon can only be captured in game through this method. The Swarm Pokémon are still the same of the previous versions.


Mansion Pokémon: The unique Pokémon that can only be obtained at the Mansion on the route 212. The Pokémon available and the process used to acquire them are still the same as Diamond and Pearl.


Interaction with other games

Pokémon Platinum is compatible to all the third and fourth generation Pokémon games. Inserting the GBA game to the GBA Slot in the Nintendo DS, while having Pokémon Platinum on, allows it to trade with games such as Pokémon Emerald, Sapphire, Ruby, Leaf Green and Fire Red. The trade, though, goes only in one way, as the Pokémon can only be transported from the third generation games to Platinum, while the opposite process is impossible. As for the fourth generation games, Platinum will automatically connect to Pokémon Pearl, Diamond, HeartGold and SoulSilver allowing the transfer of Pokémon from and to the games. It is important to note that, if the player trades one of the unique Pokémon, while they're in their new forms featured in Platinum, they'll revert to their normal ones, in games like Diamond and Pearl. Furthermore, and just like the previous versions, the game can be linked to the Pokémon Battle Revolution series on Wii, yet, only its Japanese edition can connect to My Pokémon Ranch.

Check out these Pokémon Platinum videos including the intro video, the USA launch commercial and the current speed run world record video.

The Intro video for Pokémon Platinum

The Launch Commercial for Pokémon Platinum 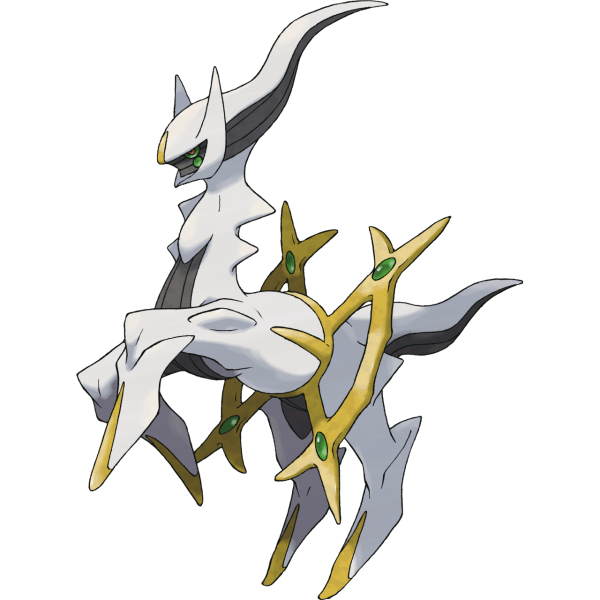 Pokémon Platinum sold a total of 7.6 million units, netting over 372 million USD worth of sales.

In Japan Pokémon Platinum was creditted for invigorating sales of the Nintendo DS console in September 2008, after selling over a million copies there in just three days. This made Platinum the fastest selling videogame in Japan at the time, a further 315,000 units were sold in the second week bringing the total to 1.3 million copies in just 9 days in Japan. Other successful sales weeks for Platinum following the post-release rush included a week where 195,000 units were sold ranking it the best seller for that week, and another where 122,000 sales ranked it the second best selling title of that week. By October 23rd of that year Platinum's sales totalled around 1.75 million in Japan, making it the second best selling game of the year at the time. By Christmas that year Pokémon Platinum had sold more than 2.12 million units in Japan.

In the United States, Platinum placed 2nd in the top 10 best selling videogames charts in the U.S after selling more than 805,000 units between the 22nd of March and the 4th of April. At the end of March it had become the second best selling Nintendo DS game at the time, and held onto that second place throughout April and May. At the end of June Platinum still held a respectible 4th place in the top 10 and even into July stood strong in 5th. More than 2 million units of Pokémon Platinum were sold in 2009 making it the 10th best selling game in the USA for the year.

In the UK Pokemon Platinum enjoyed an initial rush of sales which resulted in it being the second best selling DS title for the week ending June 11th, 2009. The following week however sales abrubtly dropped and at the week ending 20th, 2009 Platinum had fallen out of the UK's top 10, although sales did pick back up in July with Platinum being the second best, and then the 4th best selling DS game for the first 2 weeks of July respectively. By the end of March 2010 global sales totalled 7.6 million.

Whilst generally Platinum wasn't QUITE as well recieved as it's sister games; Diamond and Pearl it's reception was still generally positive. 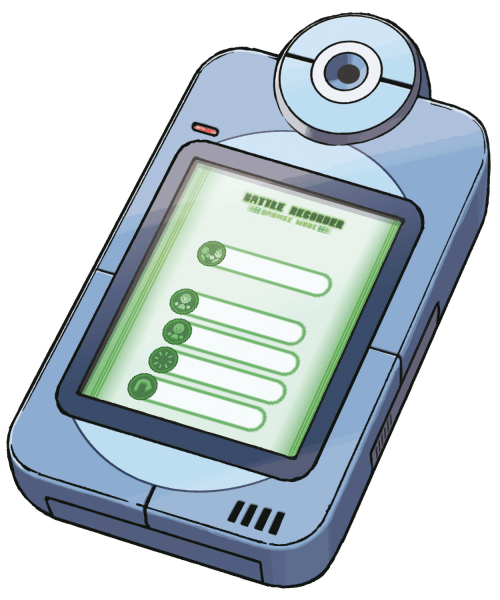 The VS Battle Recorder