Pokemon Yellow, the special Pikachu edition is a remake of Pokemon Red and Blue. It's story is more in tune with the anime than it's predecessors for example straying from the traditional grass, fire, water starter and being able to take Pikachu instead, just as Ash once did.

During a Nintendo Direct announcement on November 12th, 2015 it was revealed that Pokémon Yellow would be released for the Nintendo 3DS virtual console to celebrate the 20th Anniversary of Pokémon. The release date was set for Feb 28th, 2016.

Pokémon Yellow although released at the tail end of the Game Boy era, managed to bag the title of second best selling Pokémon title on the system. Yellow was outsold only be the cumulative effort of Red/Blue/Green, but as no one seems to know the breakdown of how many each individual version sold I'd say Yellow and its 14.64 million sales could've even been #1.

You've finally been granted your Pokémon Trainer's license, and now you're on your way to becoming the world's greatest Pokémon Trainer! The shockingly-cute Pikachu tags along behind you as you search the enormous world for monsters to train and evolve. Face off against Blastoise's torrential water cannons. Stand strong when facing Pidgeot's stormy Gust. Develop the ultimate Pokémon strategy to defeat the eight Gym Leaders and become the greatest Pokémon Master of all time!

Anime influences & Changes to the Story

The first part of the story where the player meets Professor Oak has been tweaked as follows:- 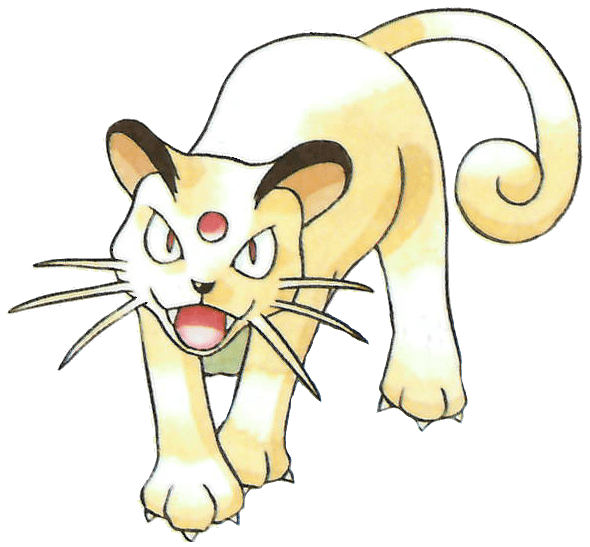 Nurse Joy and Officer Jenny as they appear in the Anime. They return to their posts in Pokémon Yellow.

Some of the generic trainers from Red, Blue, Green are replaced to more closely coincide with the anime, for example:-

Blue and his Eevee

There are thirteen Gen I Pokémon which cannot be obtained in Pokémon Yellow. And the ones you can't get also seem to have a form of anime tie-in. Lets take a look:-


In the vast majority of cases the Pokémon excluded from Yellow tie in with either encounters Ash has had with that type of Pokémon, or decisions he's made regarding them. So we start out with Weedle, Ash encountered one but didn't attempt to capture it, however went for Caterpie as soon as he saw that - this kind of eliminates Kakuna from proceedings, and I'm sure we all remember the Beedrill incident from the anime. The next ones are quite easy, Ekans, Arbok, Meowth, Persian, Koffing and Weezing are all Pokémon used by Jessie and James of Team Rocket, so thats why they were excluded. As for Raichu, when Ash took on Lt. Surge and lost, his Pikachu was so frustrated that it wanted to become Raichu so it was strong enough to battle Surges Raichu, but the pair decided that their bond was more important than the raw strength gain obtained by evolving into Raichu.

As for Jynx, Electabuzz and Magmar, I think Jynx may simply have dropped due to controversey over it's sprite, Electabuzz I'm not too sure on, and Magmar I think was due to the fact that Ash had his Charizard in his team as a fire type at the point when he encountered Magmar in the series, lessening his requirement for a strong fire type such as Magmar.

Prepare for trouble, and make it double. Team Rocket are back, and this time its not generic grunts - Jessie and James. Although their names come up as 'Rocket Grunt' their sprites are very distinctive and it's obviously them. Check out the image of Team Rocket from the Anime on the left, and the encounter sprites on the right. Additionally Team Rocket are well known for referring to Ash as 'the twerp' in the Anime, and many of their sayings have been added to the games dialogue. 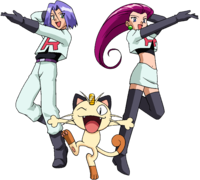 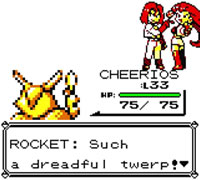 Like in the Red, Green and Blue versions of the game Team Rocket is still led by Giovanni, and they still commit the same sinister deeds. The only true differences are that said sinister deeds are comitted by some more familiar faces.

You can battle each other or trade between two carts via a Game Boy Link Cable. Other benefits of using this feature include being able to trade Pokémon for which trading is an evolution requirement, and trading with other first generation games in order to complete the Pokedex. 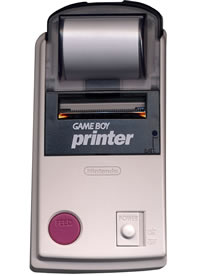 Pokémon Yellow is completely incompatible with any games Gen III or newer. Trying to trade between a Japanese and Western cart WILL result in corrupted data, so avoid it at all costs; likewise Battle between them wouldn't work either, but doesn't seem to do the same damage to game data when attempted.

As mentioned previously Pokémon Yellow also includes Game Boy Printer functionality which enables the player to print off various stickers ranging from PokéDex entries, print screens of party Pokémon, the Diploma and their highscore on the Pikachu's Beach minigame.

Check out these Pokémon Yellow videos including TV Commercials, trailers and the intro/opening video.

The Official Trailer from way back in 1999

A piece of music present in the games data files which did not make it to the final release. I believe it would've been used for an encounter of some kind.

So we've covered the stuff that ties in with the Anime, but theres also a good few bits that don't. Check them out:- 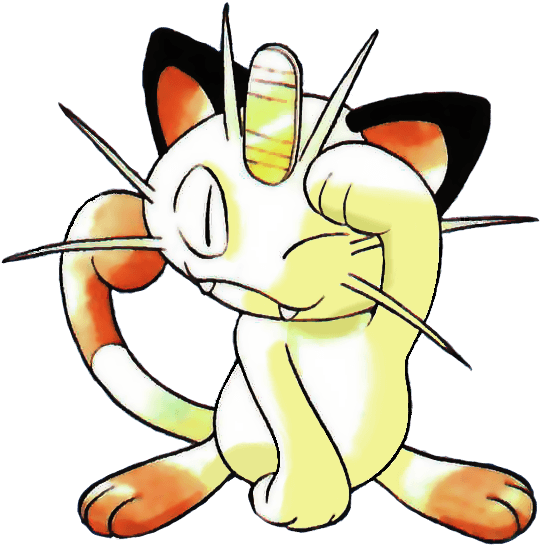 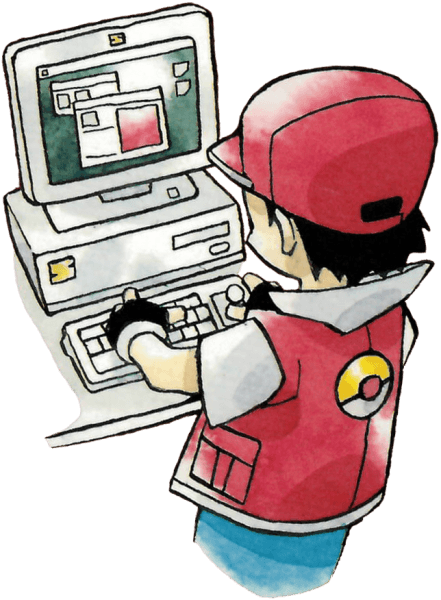 Pokémon Yellow was a commercial success; selling 14.64 million copies worldwide and netting a total sales of $454 million USD. Prior to it's release Nintendo had already conservatively predicted that the title should earn them at least $75 million usd during the holiday season of 1999. Nintendo's executive of the day George Harrison made another conservative prediction that Yellow's sales would pass the 3 million unit mark, and outsell even popular Nintendo title Donkey Kong 64 - just about George, just about! ;-)  The release of Pokémon Yellow coincided with that of the release of Pokémon The First Movie, some partially credit that as a reason Yellow did so well.

In the U.S alone Pokémon Yellow recieved more than 150,000 pre-orders for the console + game bundle, where the cartridge on it's own sold more than 600,000 units in the first week of being released and had broken the 1 million sales mark within 14 days. This made gave Pokémon Yellow the title of fastest selling handheld console game of all time. The success of Yellow was acknowledged as having boosted sales of the Game Boy Color overall in the 1999 festive season. As a result of high demand and inadequate supply Target actually publically apologised for not being able to meet what they described as 'unprecedented demand', similarly CNET conducted a survey of videogame stores across the U.S during December 1999 and found that basically none had Yellow in stock. Yellow remains to this day the fastest selling Pokémon title in the United Kingdom (not to be confused with highest overall total sales).

Pokémon Yellow was well recieved by critics, fans and new players alike since the very beginning. Lets take a look at some of the review scores:- 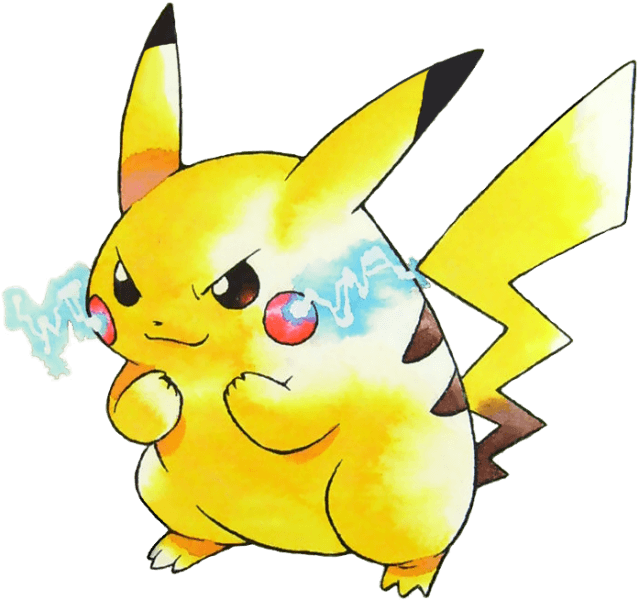 The Pikachu Artwork from the Games Cover