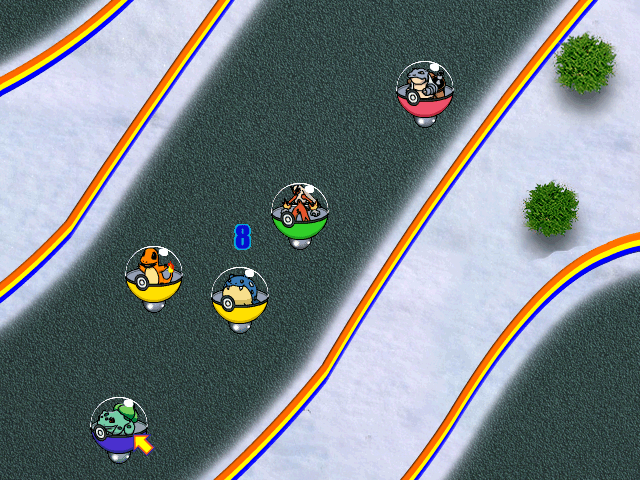 Pokémon Team Turbo is a racing game spin off title in the Pokémon series which was released for the PC in 2005. It was the second Pokémon PC title to be produced by ValuSoft and developed by ImaginEngine Corp, following on from Pokémon Master's Arena in 2004. Like Masters Arena, Team Turbo was only ever officially released in North America and both titles fall under the Gen III spin offs subcategory of games.

Team Turbo features six racing courses and five mini games, succesfully completing the mini games awards powerups which can be used in the main races. The player can either choose to play a specific minigame or race track from the main menu or they can select 'Adventure Mode' which will effectively take the player through each race track in order with mini games inbetween to allow the player to gain extra powerups.

The Street Race - Racing inside giant modified Pokéball's you'll go head to head against some of the best Pokémon racing drivers in the world. Using the mouse, steer your racer to the finish line as fast as you can. Stay on the road and try not to run into your opponents. Along the way you'll see letters on the roadway. Each time you run over a letter, you'll get a turbo boost. Just click the mouse button for an extra burst of speed!

Dirt Track Insanity - It's time for the second race! This time you'll be racing on dirt, so it will be a little bit harder to control. Domino pieces are scattered around the track. Collect the dominos with your characters picture to get a quick speed boost, but watch out - if you run over a domino which does NOT have your character's picture, you'll spin out! Press the mouse button to use any turbo boosts you won in the Charizard's Crossword Challenge.

Grand Prix - Now you're in the big leagues, racing on a Grand Prix course. Tight corners and long straights will test your racing skills. Just like in the first race, collect the letters in your Pokémon's name as you move around the track. Each time you collect one you'll get an instant burst of speed. Press the mouse button to use any Spark Showers you won in the Domino Dash game.

Aqua Mania - It's time to take the racing action to the water, so try to stay dry! This is a tougher race than the others you've faced. After all, it's pretty hard to turn in the water! There are a lot of shapes floating in the water. If you run over a green one, you'll get a quick turbo boost, but if you run over a red one, you'll slow down for a few seconds. If you won Furret Speed or Super Furret Speed from the Word Finder game it will be turned on automatically in this race.

Snow Insanity - Put on your boots and gloves, because it's time to race in the snow! This treacherous race course is the toughest yet, because it's all downhill! You'll be going faster and faster as the race progresses. You'll also see numbers on the track. Each one you run over in order (1,2,3, etc.) will give you a bigger instant turbo boost, but if you miss one, you won't get any more boost for the rest of the race! Also, if you won any Nitro Nuts from the Black Out game, you can use them on your opponents! Just press the left mouse button to fire them. A hit will cause an opponent to lose control for a few seconds.

The Marathon - This is it, the final race! We've combined all five of the previous tracks you've raced on to give you the ultimate marathon driving test. Dirt, water, Ice, snow, they're all here, along with your toughest set of opponents yet! If you won any water Balloons from the Door Dilemma game, you can use them in two ways: press the left mouse button to shoot it forward at an opponent. A hit will cause a loss of control. Press the right mouse button to drop the balloon on the track behind you and make a puddle of water. Anyone who drives into the puddle will slow down for several seconds.

Bulbasaur's Domino Dash - It's dominos with a twist! Only this time the dominos don't have spots on them, they have Pokemon portraits. You need to place pieces with the same portrait next to each other and complete the layout before time runs out. Use the mouse to drag and drop a domino onto the desired spot on the board. If you get stumped, you can press the Help button, which will place a random domino into it's proper position on the board. 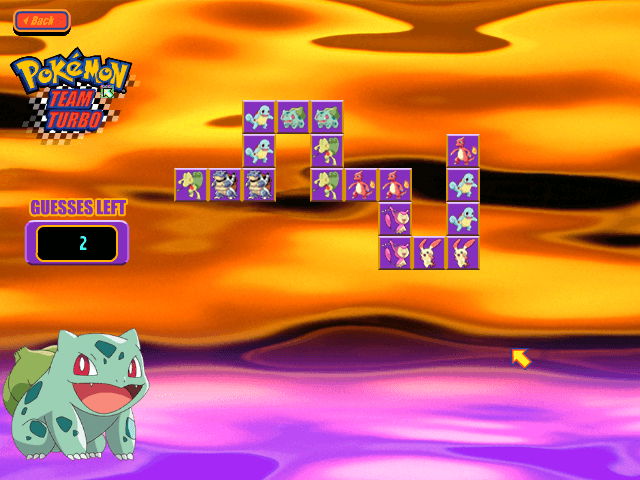 If you complete the game with Helps remaining, you'll be rewarded Spark Showers which you can use in the next race!


Squirtle's Door Dilemma - A Pokemon is behind each of the doors, but you don't know who is hiding where! Using the mouse, drag a Pokemon portrait on top of each of the doors, and then press thte Guess button. Now, pay attention to the doors. If a door opens all the way, you've made the right guess for that door - good job! If a door only opens partway and then closes, it means that the Pokemon you put there is hiding behind one of the OTHER doors, but NOT the one you guessed. If a door doesn't open at all, then the Pokemon you put on top of it isn't behind ANY of the doors. Now you've got to re-arrange the Pokemon who weren't behind the correct doors and Guess again. 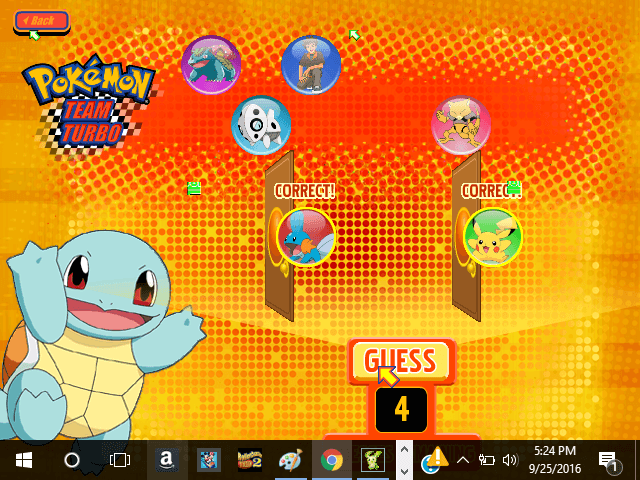 The game ends when you've put all the Pokemon in the right position or when you run out of Guesses. inishing the game with Guesses remaining will give you Water Balloons for the next race.


Charizard's Crossword Challenge - Never had Charizard down as a crossword type of mon? me neither, but we were wrong. Test your Pokemon knowledge to the limit! Click on any part of a missing word to see its clue appear at the bottom of the screen. Type in the answer and press the Enter key to see if you're correct. 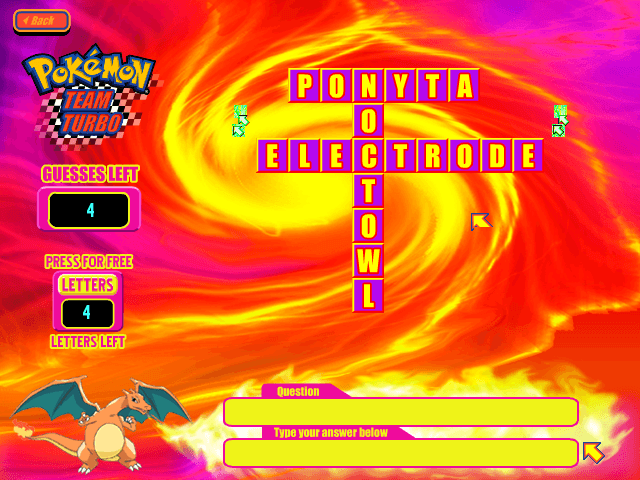 If you are stumped, press the "Free Letter" button, and a random letter in the current word will be revealed. If you finish the puzzle with Free Letters remaining, you will get that same number of Turbo Boosts for the next race.


Mudkip's Word Finder - It's a big word puzzle filled with Pokemon names, and you need to find them all before the time runs out! The names you need to find are at the bottom of the screen, along with a mystery name (which appears as ??? on the list). Names appear forwards, not backwards, and always either across or down, never diagonally. When you find one of the names, use the mouse to click on its first letter, then click again on its last letter. When the whole word is highlighted, press the Enter key to see if you're correct. 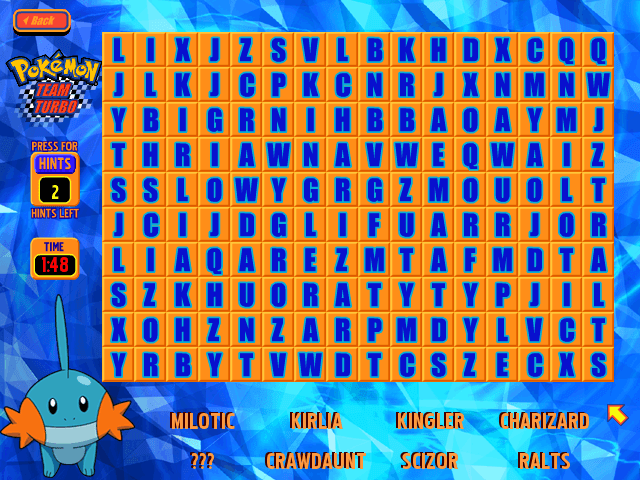 
Skitty's Block Out Game - It's time for a fast-paced game of shape recognition. Pokemon pictures are falling from above, and it's up to you to put them into the proper combinations. Look at the window on the left side of the screen to see how many of each combination you'll need to make. Click the left mouse button to make a falling piece move to the left, and click the right mouse button to make it move to the right. 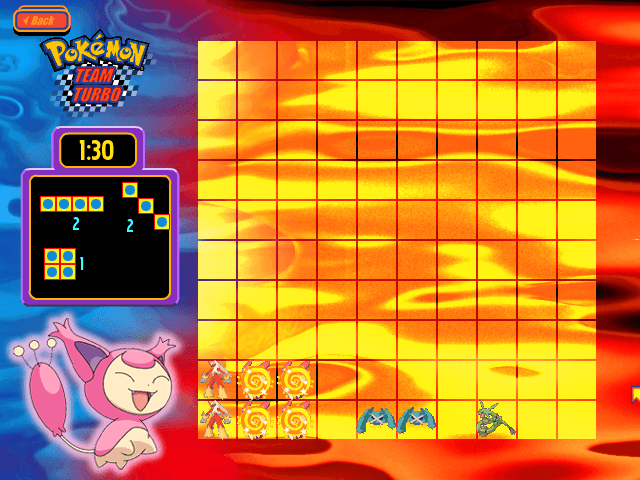 Each time you make a combination, those pieces will disappear and cause any pieces that were above them to drop down. Make sure you don't let the pieces build to the top of the screen, or you'll lose! if you make enough combinations, you'll be rewarded with Nitro Nuts that you'll be able to shoot at the other players in the next race.

The Evolution Continues!
It's time to race and Team Turbo needs you! Challenge your Pokémon knowledge in 5 exciting games, each with multiple skill levels, to earn racing power-ups. The use these turbo boosts at just the right time on 6 tough race courses to cross the finish line first.

Dominate
Squirtle's Door Dilema
Can you guess Squirtle's secrets and figure out who's hiding behind the doors? Open all the doors to win a Water Balloon to slow your opponents on the race track!

Meet your match in
The Street Race
This course may be straight, but it's far from easy! Maximize the traction of your racing ball, collecting your character's letters for double speed as you race to the finish line.