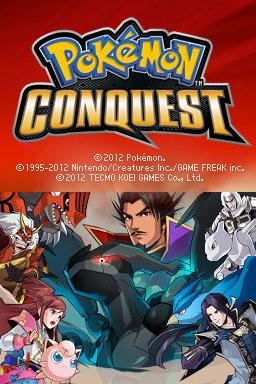 Released on Nintendo DS, Pokémon Conquest, also known as Pokémon + Nobunaga's Ambition, is a turn based strategy game and a cross over with the Nobunaga's Ambition game series, portraying the unification of the feudal Japan during the Sengoku Period.

It is the first Pokémon game in this genre, featuring several Pokémon up to the fifth generation. The game has a rather unique gameplay and storyline, where both Japanese Warlords and Pokémon work together to unite the divided Ransei region.

The first news of Pokémon Conquest as an upcoming game was in the first volume of CoroCoro Magazine released in 2012 and an announcement at Jump Festa 2012. Later on the game was officially revealed during the Jump Festa 2012 event and it's official website launched not long after.

Warlords and Pokémon unite to conquer the land!

The story starts out with the player picking to play either as a male or a female then choosing a name for their character, who's the newest Warlord in the Ransei region and the ruler of the Aurora Kingdom. 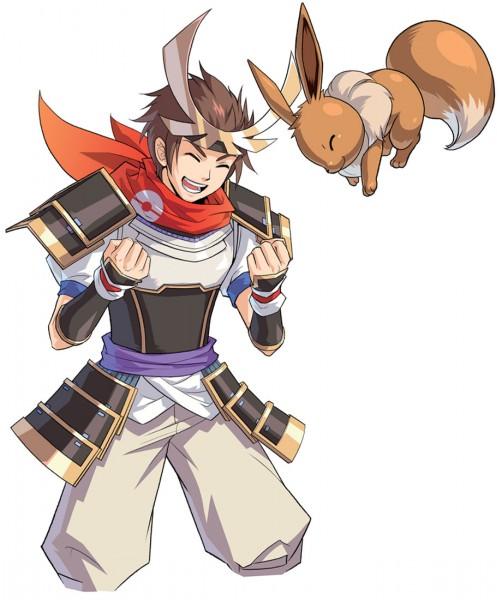 The Hero and his Eevee
The region is divided into seventeen Kingdoms, where a Warlord governs each one of them. The region is also home of a legend that foretells the return of a mighty being that created the whole region, once it is finally united. After being mocked by the three Warlords Masanori, Mitsunari and Kiyomasa who find the player unworthy for such title, the underrated Warlord gets challenged by two Warriors from the Kingdom of Ignis. A girl named Oichi joins the player's side in the battle and together they beat the Warriors. She then entrusts the player with the responsibility of uniting the feuding Kingdoms, all while teaching them most of the game mechanics and tricks.

The player starts by first conquering the three Kingdoms of Ignis, Greenleaf and Fontaine, in order, crushing their respective Warlords Hideyoshi, Motonari and Motochika. As the player progresses as a Warlord, they learn how to recruit other Warlords to team up with them, along with new wild Pokémon.

They decide, next, to conquer the Violight, Chrysalia and Pugilis Kingdoms ruled respectively by Ginchiyo, Yoshimoto and Yoshihiro. Once that is done, the Kingdom of Illusio governed by Shingen and the Kingdom of Terrera governed by Kenshin, become available for conquest. As the player decides to attack either one of them, the selected Kingdom responds with an attack on the player's Kingdom, forcing them to go and defend it. Succeeding in defending their Kingdom, the player transforms into a stronger Warrior and is now able to conquer one of the two Kingdoms, as both of them will 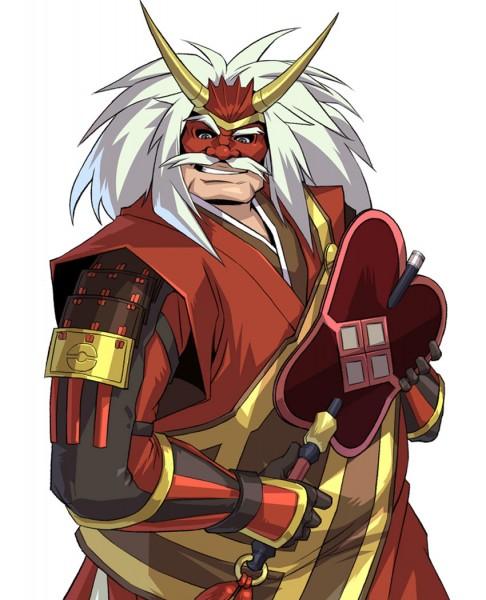 Shingen automatically join the player's side once one of them falls. As Kenshin and Shingen join the player's party, the famous Nobunaga, who turns out to be Oichi's brother, appears and reveals that he too seeks to reunite the whole region under his supreme rule.

The player continues to conquer the rest of the Kingdoms in the area and obtains throughout the process three evolutionary stones that can be used to evolve Eevee. Now that all the available Kingdoms are defeated, Ieyasu, Nō and Mitsuhide, who are Nobunaga's strongest Warlords, appear with their respective Kingdoms Valora, Spectra and Nixtorm. Beating them gives the player access to the last Kingdom, Dragnor, where the Nobunaga resides.

With the final Kingdom under control, strange lights shoot out from different parts of the region toward a tower in Dragnor, where the player finds the legendary Arceus; the awaited creator from the legend. The player successfully links up with Arceus, but is then, once again, confronted by Nobunaga and four of his Warlord followers, revealing that his true motive was to get Arceus to appear and then defeat it. The real final challenge takes place between the player and the five Warlords, from which the player emerges as the victor and ultimately reunites the region and restores peace to the land. Arceus then disappears, stating that it is destined to meet with the player again.

Completing the main scenario wil unlock Special Episodes, in the form of different smaller missions each with their own short storylines.

Pokémon Conquest offers a variety of Pokémon from the first five generations, which the player can befriend and set as partners for their Warlords. Some of these Pokémon can only be obtained through special ways like the Swarm Pokémon and the Legendary ones.

When there are wild Pokémon present on the battlefield, the player will notice a medal above them, which determines their compatibility and how much Link they can achieve with the current Warlord, whom Pokémon the player is moving. The medal's color refers to the degree of compatibility between the Warlord and the wild Pokémon. If they're compatible, the player can choose the link option, after getting close to them. This will trigger a mini game, where the player has to hit A, as each energy ball goes through the circle. Successfully hitting the button while the energy ball is in the middle of the circle will increase a gauge that needs to be filled up completely to befriend the Pokémon. The befriended Pokémon will then join the player's side, disappearing from the battlefield.

Some of the Warlords and their partners

During the game, the player will get randomly informed that some wild Pokémon are Swarming a certain area, that will appear in one of the Kingdoms. The Swarms that last for the whole month of in game time, are the only place to find these specific Pokémon:

Throughout the Special Episodes, the player might receive a notice of a weird Pokémon appearing in a new area, on one of the Kingdoms. The weird Pokémon will turn out to be a legendary one and the player has only one chance to befriend it, since it won't reappear again if the player fails.

The game features a password system where they can different codes with which many Pokémon are unlocked. Unlike other games, where passwords unlock the Pokémon instantly, Passwords only make sure that the Pokémon's encounter or event will happen for sure. Once the Pokémon's password is entered, the player might get told about the Pokémon swarming certain areas.

The game takes place in the Ransei region, a big island shaped like Arceus (which is actually its creator), filled with many mountainous areas and surrounded by sea. It is divided into 17 Kingdoms, each of them ruled by a Warlord that uses one of the 17 Pokémon Types.

The player may befriend both common Warriors found randomly in the different Kingdoms and the actual Warlords ruling the Kingdoms. To befriend a Warlord, the player has to either defeat their Pokémon without taking from it, or defeat their Pokémon in 4 turns. Some Warlords would depend on scenario progression before becoming available for recruitment.

In order to reunite Ransei, the player would have to defeat many Warlords and Warriors. When a character is defeated, they join the player's ranks and their Pokémon become available. The player may switch the Warlords' Pokémon and try to find them better partners, having a Pokémon that can reach a perfect Link with the Warlord will allow them to be extremely strong, stat wise, and be able to evolve thoroughly.

On the overworld map, the player have different functionality at their disposal, which increase as the game progresses. Any available area may be selected on the map, giving the player information about the Kingdom itself and their inhabitants. The player can enter a selected Kingdom, within which there are several sub areas, including fields, caves and wild areas containing wild Pokémon. There are also civilized places, where the player may interact with the citizens there, like the shop keepers.

The Aurora Castle in the Kingdom of Aurora, the players home Kingdom.

The battles take a turn-based strategy format, where players can use up to six Pokémon at a time, with their respective Warlords partners. Each Pokémon has only one move, instead of four, and mostly from their Pokémon type. The battles between Pokémon does still obey the weakness and resistance battle mechanics, featured in the main series. Moreover, Warlords too have abilities that influence their Pokémon during the battle, by increasing their stats or even helping them recover faster. To win the battle, all the opponent's Pokémon must be knocked out, or the player must reach their goal in the mission.

Each month the player has one monthly action, with which they can do one of several activities. Aside from battling, the player may dedicate their monthly action to buy an item from the in-game shop. One should notice that browsing the shop without buying any item won't consume the monthly action. The player can also use the monthly turn to train the Pokémon, increasing their Link with their Warlord.

At the start of every month, variouis people will appear on the overworld map, informing the player with the events occurring in the different Kingdoms. These are the events that the player might encounter:

Both Pokémon and Warlords can evolve in Pokémon Conquest. For a Warlord to evolve, they need to reach the highest Link possible with the their perfect match Pokémon. When that is done, they'll undergo a transformation, changing their appearances and increasing their stats.

As for Pokémon evolution, most Pokémon will evolve upon raising their stat levels to a certain amount, while others will require a different process. Certain Pokémon would need to have an item, such as the Metal Coat or Water Stone, attached to them and be used in battle. Others would require raising the Link percentage to a specific number. 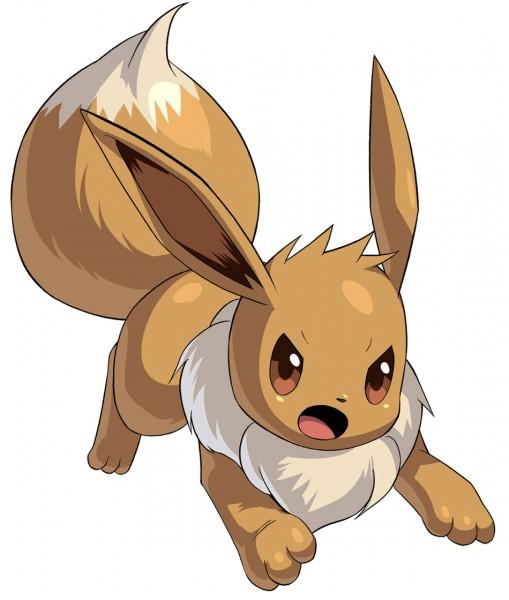 They are the post game episodes, unlocked after defeating Nobunaga in the main storyline. The player will encounter many new Warlords within these missions, along with their Pokémon, which can be added to the player's ranks. Only 8 missions are available at first, and many more get unlocked as the player finishes them, reaching a total of 33 mission.

Pokémon Conquest does also offer a multiplayer mode thanks to the wireless feature of the Nintendo DS. Player's may battle each other, with the Host being the one who manages all the match details, like the area where it will take place and the Pokémon Link limit. They may also choose whether they'll be attacking or defending, or they might also let it be randomly chosen.

Videos from Pokemon Conquest including the trailer, TV commercials and opening/intro.

Intro / Opening, definitely worth a watch to give you a feel for the game

The game was for the most part very well received, receiving some exceptionally high scores on major review websites. Let's take a look at these scores:


Overall, the game was one of a kind and successfully merged the worlds of Nobunaga's Ambitions and Pokémon, creating a game that would please (most) fans of both games. 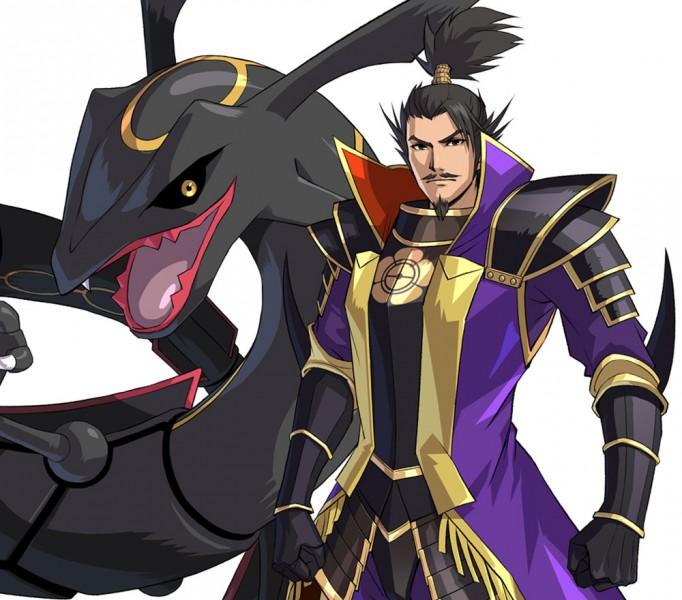 Nobunaga and his Black Rayquaza