***
gplus
Digg
Gshare
Reddit
facebook
twitter
Pin It
Pokemon Go Raids were launched on June 23rd, 2017 when Niantic finally overhauled the games gym system. There are few who would argue the fact that the gym's were stagnated and something needed doing to maintain the interest of existing players and to try and ressurect lapsed & attract new players. It looks very much as though the introduction of raids and raiding in Pokémon Go may well remedy that somewhat so lets take a look at Pokémon Go raids in full detail.

Raids are an exciting new feature whereby a much more powerful than normal Pokemon will spawn/hatch at a gym. These boss type Pokémon are on average 7-8 times+ higher in CP than the average trainers equivalent version would be, and depending on what tier of boss they fall into, potentially even higher. Players will recieve a notification stating that a raid is going to start by them soon and an egg will appear above the host gym alongside a countdown timer of one hour plus which is intended to allow time for an adequate number of players to gather to take on some of the tougher raid bosses. 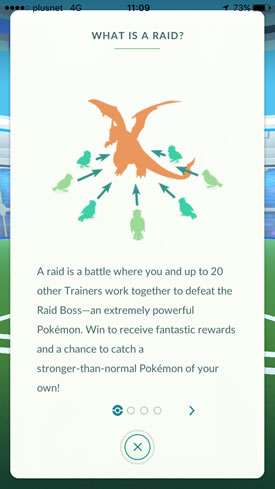 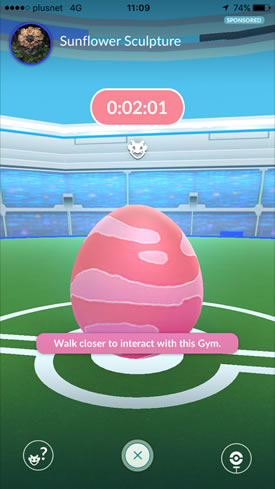 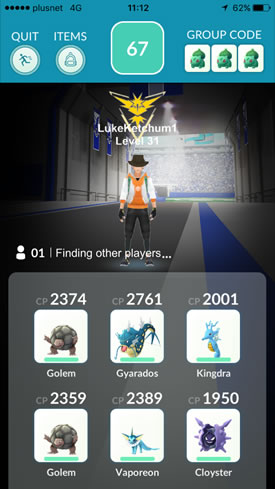 Raid explanation (left), waiting for a Tier 1 raid boss to hatch (centre), selecting a team and waiting for players before engaging a raid boss (right)

Once the timer finishes counting down the timer and egg icon above the gym will disappear and the boss will arrive. As players arrive they can organise their Pokémon into their most appropriate six for that battle, and even group up with other players using by sharing their group code. Your group code is the three little Pokémon icons in the top right while you're waiting for the battle to start.

Raid access
Every day a player will get one RAID PASS for free from the first PokeStop or Gym they visit - as long as they don't already have one. The raid pass is an item that is required to participate in raid battles. You will not be given raid passes until you are of the required level (currently level 20). If you didn't use your raid pass in the previous day, you can get your daily pass, use it, then get another one on the same day. 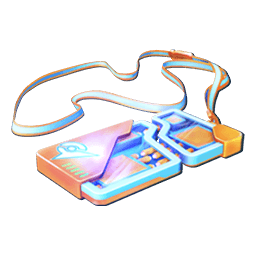 If you want to participate in more raid battles you'll have to purchase a Premium Raid pass from the Shop at the cost of 100 Pokecoins. Although this is yet more Pokecoin outlay this is offset a little by the fact that the new gym system is somewhat more generous than the previous one.

In the very first few days of raids they were only accessible to trainers of level 31 and above however after much protesting from the communities slacker trainers this level was dropped ;-) Initially dropped to 28, then to 25 and now raids are available to everyone level 20 and above making them much more accessible to the playerbase.

Battling the Raid boss
When the battle begins it's a free for all and multiple trainers and Pokémon can attack the raid boss at once but don't allow that to make you slack combat-wise because the rewards you are given from a raid are based on a number of factors including these:-


All of the above factors contribute to how many Premier Balls you are given to use in the bonus game. A damage contribution of +1 will yield you an extra Premier Ball, your team controlling the gym the raid took place at will give you an extra 3. If you are planning an afternoon of raiding in your local area, it's a great idea to go and take some gyms for your team first, ensuring you and your team mates have the best chance possible of catching any local raid bosses.

Bonus game
The bonus game is where you get the chance to capture a scaled down version of the raid boss that was just defeated. Raid bosses can only be caught using Premier Balls awarded for your efforts in battle - the better you did in the fight the more balls you'll get and the more chance you'll have to catch the boss. In the screenshots below you can see from left to right: me finishing off an easy level raid boss, being awarded premier balls based on my contribution to the raid and finally the scaled down version of the raid boss that I caught. 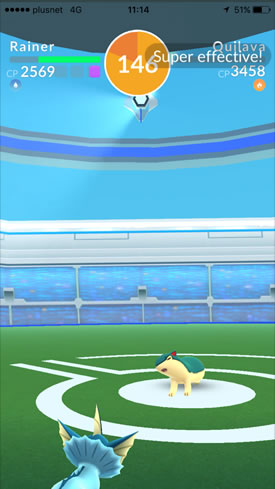 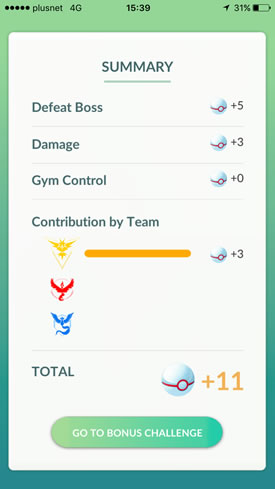 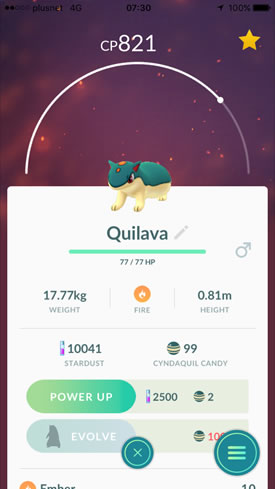 Tier 1 raid boss Quilava falls to my Vaporeon (left), Recieving my premier balls for the bonus game, based on my contribution (centre), my captured Quilava (right).

If you are a reasonably good level 25+ with decent Pokémon you should be able to solo the easiest levels of raids as I did above without much trouble. This is some consolation for those players who don't have a big Pokémon Go precense in their area as you'll still get to catch a Pokémon you might not commonly see in the wild. It should also be noted that of the 4 raid boss Pokémon I have caught so far all of them have had top level appraisal values and stats.

Update 02/09/2017: After participating in lots of raids at all levels I can confirm that the appraisal values of Pokémon caught in these bonus games are always going to be within the top 2 tiers of appraisal and stats, however their bonus stats for attack, defence, HP (if any) are a lot more random. Hence even with Legendaries you'll see people who already have 5-6 Articuno's turning up to Articuno raids to try to get one with a better overall IV value.

As well as getting the chance to capture the boss Pokemon to serve in your ranks you also get given a good couple of items for successfully completing a raid. You may get a stack of normal items like revives but also special items such as:-

In an update in August 2017, Potions were added as raid rewards, although on the surface no one would particularly want potions as a reward compared to say rare candies etc anyone who raids frequently will tell you that Potions have once more become a valuable commodity, getting 6-10 Pokémon knocked out in each Legendary raid you go to soon adds up to a lot of mon's in casualty waiting for treatment.

The higher tier boss you defeat the more special items you are likely to recieve and the higher percentage chance you have of getting a rare drop like a TM. It's not totally apparent whether your personal contribution (in terms of damage etc) has any affect at this point.

being more difficult and so on. The colour of the egg above the gym where a raid is due to start will indicate what level of rarity/what tier the raid boss is going to be from.

Lets take a look at all the raid bosses that are currently available and what tier they are in etc:-

Tier 1 Raid bosses: How to beat the easiest bosses in Pokemon Go with Best Counters

The easiest raid bosses consist of the second evo's of the Johto starter Pokemon and the mighty Magikarp. These guys all spawn from Pink/common eggs and should be comfortable to solo for most decent trainers.

Things get tougher in tier 2 and you'll need a reasonable team to beat these. You will obtain greater rewards in terms of items for defeating one of these bosses then you would from a tier one boss.

This is where the solo party ends. You'll need to team up with at least two or three other strong trainers to take down one of these tier three raid bosses but the reward is also much greater particularly in the cases of the harder to get hold of Alakazam and Machamp. Once more you are likely to recieve an increased amount of item based rewards for conquering one of these guys, that reward will be shared with the player's that you'll need

The most powerful non-legendary raid bosses. It'll take 5-6 strong trainers with the right type of Pokemon Teams to bring these guys down. But for the chance to grab Snorlax's and Tyranitars it's definitely worth coordinating with some others and attacking together.

Following the one year Anniversary events of Pokémon Go, including the disaster that was Pokemon Go Fest Chicago we began to see the release of our first, much anticipated Legendary raids. These came in the form of Articuno, Zapdos, Moltres and Lugia. After this August 2017 saw Mewtwo raids getting tested out in Japan, so it's inevitable that the rest of the world will encounter the most powerful Pokémon of all fairly soon.

On the 1st of September 2017, Niantic let the dogs out, with Entei, Suicine and Raikou unleashed on the world as raid bosses. Each region got one Legendary Dog each and it's due to be rotated monthly until every region has had it's turn.


I have no doubt that we have many years of Pokémon GO raids ahead, as we still have another  5+ gen's worth of Legendaries/Powerful mons which no doubt Niantic will drip feed us with over the next half decade. But beware of that raid fatigue, it's real!

All in all Pokemon Go's raids have injected a new element of fun and invigorated the social aspect of the game. A week after the gym overhaul and raid release Pokemon Go has shot back up in the app charts. In the U.S App store it had risen from around 130th most downloaded to around the 70th.