Pokemon Heroes: Latios and Latias, or Pocket Monsters the Movie: The Guardians of Altomare as it directly translates from it's Japanese title is more commonly known simply as Pokemon Heroes. It's the fifth movie in the Pokemon franchise.

The film was initially released in Japan on July 13th, 2002 and had staggered releases in other countries right the way up to the middle of 2004 when it finally finished releasing across Europe. Like all of its predecessors, this movie was directed by the chief director of the Pokemon Anime, Kunihiko Yuyama and voiced in the Japanese release by the cast of the anime; Rica Matsumoto, Yuji Ueda, Mayumi Iizuka, Megumi Hayashibara, Shin-ichiro Miki and Ikue Ōtani.

Distribution and Airings
As in Pokemon 4Ever before it, the English adaptation and distribution were done by 4Kids Entertainment and Miramax films respectively with voice acting being done by the regulars from the English anime adaptation; Veronica Taylor, Eric Stuart, Rachael Lillis and Maddie Blaustein.

Cinema releases of the movie were a little more limited for Pokemon Heroes as its predecessors post Pokemon the Movie 2000 hadn't performed amazingly at the box office. As such the May 16th, 2003 U.S cinema release of Heroes was shortlived and it was then released on DVD and home video in January 2004.

A good few years later the movie was aired on both Cartoon Network (several occasions) and on Toon Disney (November 27th, 2007). It was the fourth time a Pokemon movie had been shown on Toon Disney, largely down to the fact that Miramax; the distribution company for these movies were still owned by Disney at this point; the first three movies they showed were Jirachi: Wish Maker, Pokemon Destiny Deoxys and Pokemon 4Ever.

Plot & Chronology in terms of the Anime
The film ties in with and compliments Pokemon Season 05 - Master Quest and also signifies the end of the original Pocket Monsters Story arc in Japan.

The story of the movie follows Ash, Misty and Brock's continuing journey through the Johto region and the main setting is a city called Alto Mare which means "High Sea" in Italian, it's said that this city is based on Venice, Italy. Although this movie is set during the times of our heroes adventure in Johto, the Island where a lot of the film takes place is just off the coast of the mainland Johto region.

DVD / Blu Ray releases
The movie was re-released on DVD in the UK by Optimum Home Entertainment on May 9th, 2011. It also got re-released as a twin pack alongside it's predecessor Pokemon 4Ever by Studio Canal on April 2nd, 2012 only one day before the twinned Pokemon Black & White movies came out on April 3rd, 2012. In the USA Echo Home Entertainment released Pokemon Heroes alongside Pokemon: Destiny Deoxys on Blu Ray as a twin pack.

Two cat burglars working for Team Rocket, Annie and Oakley, are in a library checking out a book... after hours. It tells about the Soul Dew and a mysterious device that it is used to control, the defense mechanism of Altomare (DMA).

Ash and Company stop off in Altomare, a city that uses a canal system instead of roads for its main avenues of travel. While Ash is competing along with Misty in a local canal race, a couple of invisible creatures pull Totodile off course. After Misty wins the race, the runner up offers to give her and her friends a tour of the city and tells them about the Guardians of Altomare, a latios and a latias. When the trio goes for ice cream, Pikachu wanders off and Ash follows. They meet a mysterious girl who turns out to be the latias in disguise and wind up rescuing her from being captured by Annie and Oakley. Ash doesn’t know the reason for their interest in the girl, and the girl seems to be unable or unwilling to speak. She does seem to be interested in Ash for some other reason than having just been rescued from him. As they escape the girl takes Ash back to Misty and Brock then disappears.

Then they arrive at the Altomare Museum of History where the DMA is kept. There Ash spots the girl and leaves the museum to follow her. Ash loses her, but finds Latias instead who leads him and Pikachu to a secret garden. There he is introduced to Bianca who is the girl Latias disguises herself as. He also learns about the powers of Latias and Latios, the history of Altomare, and the secret of the Soul Dew. However, Ash was followed by a flying spy camera controlled by Annie and Oakley.

That night, Annie and Oakley make their move to capture the laties and steal the Soul Dew. The thieves capture Latios and steal the gem. Then they find the instructions on how to use the gem to power the DMA, but Latias escapes to look for Ash. They then go to the museum with Latios in tow and activate the machine. They also capture Bianca and her father, Lorenzo, in the process.

Latias finds Ash at the PokéCenter. Oakley, mad with power with controlling the DMA, revives the fossils of the evil kabutops and aerodactyl, and activates the barriers to prevent people from moving around the city. Latias knocks Ash into the canal, but Misty and Brock are trapped. Ash only has Pikachu with him, but Brock and Misty send Crobat, Politoed and Corsola to help him. Under attack by a water trap created by Oakley, Latias uses Teleport to take Ash, Pikachu and her to the museum causing a feedback to the DMA. The DMA then starts to go out of control, trapping Oakley inside. Releasing Latios shuts the DMA down just as Misty and Brock arrive. Annie goes to grab the Soul Dew, but it releases a burst of energy trapping her with Oakley in the DMA. With the gem now burned out, the water drains out of the canals. The laties rush to prevent the backwash in the form of a tidal wave from destroying the city, but Latios, weakened by its injuries while captured, dies. The waters return to the canal, the DMA shuts down and the city returns to normal. Latios is recovered by Ash and the others as a new Soul Dew.

As Ash and company leave, Latias in the form of Bianca catches up with Ash and gives him a present and a kiss. As they finally leave, they see Latias flying above with baby laties following her. Annie and Oakley are released from the DMA and are taken into custody. Eventually winding up in prison.

Every year the city of Alto Mare holds a special Water Pokémon race through its canal streets—and this time around, Ash and Misty are top competitors! Even though he doesn't win, Ash still finds his own special place in the heart of a mysterious girl that he rescues from two roguish women. But this isn't any ordinary girl—it's actually the Legendary Latias in disguise!

Ash gets a special peek into the secret world of Latios and Latias, but this world is soon threatened by the two women from before—Annie and Oakley—who are after the two Legendary Pokémon, as well as a mysterious jewel called the Soul Dew. These elements combined will let them control a powerful machine that normally protects against danger. When the machine malfunctions, though, it not only puts Latios and Latias at serious risk, but the entire city of Alto Mare!

The voice cast of both the Japanese and English dubs of Pokemon Heroes.

There were no trading cards handed out at theater showings of Pokemon Heroes, however when the DVD's were released in the West we got two different Black Star Promo cards, one featuring Latios and one featuring Latias. These cards were by Nintendo, not by Wizards of the Coast as many previous movie promos had been.


Both of these same cards had actually been used as McDonald's promo cards in Japan previously. The pictures above show the McDonald's Japanese version, if anyone has pics of the English translated versions that came with the DVD that would be really nice so please send on luke/at/pokemondungeon com.

Movie posters, teaser posters and the Japanese & Western DVD covers for Pokemon Heroes. We are looking to add magazine scans advertising the movie, and maybe some reviews / mentions of the movie from gaming and movie magazines. If you know where we can get some that would be super-awesome, please contact on luke/at/pokemondungeon/com. Thanks! 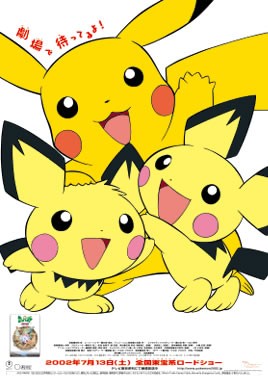 In the Japanese original, there were more than two laties. This is why there are more laties during the closing credits.

Buy the movie on DVD & Blu-Ray or Digital Purchase

Here are a couple of links to buy a copy of the movie if you'd like to. I've put in links for DVD and Blu-Ray versions in various localities.