Pokemon Ultra Sun & Ultra Moon for the Nintendo 3DS are the second paired titles of Gen VII. They were released worldwide on November 17th, 2017 after being initially announced during a Nintendo Direct Broadcast on June 6th, 2017.

The games follow an alternate version of the story from their predecessors; Pokémon Sun & Moon and thus are still set within the Alola region. As well as an alternate universe storyline there are also many new features, characters and enemies - the most notable of which being Team Rainbow Rocket.

In addition to this there are lots of Pokemon availble in USUM that were not available in the original Sun & Moon titles, including ALL legendaries from all core series games to date! That's over 400 available Pokémon in total.

Pokemon Ultra Sun & Ultra Moon are said to be the last Core Series Pokemon titles that will be launched on the Nintendo 3DS. 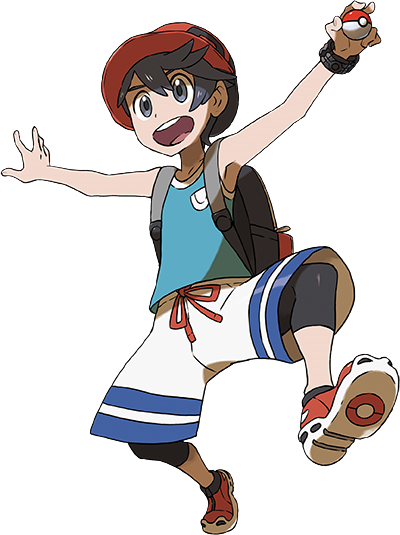 Ominous dark clouds are spreading in the sky above the Alola region, the setting of Pokémon Ultra Sun and Pokémon Ultra Moon. With new worlds to discover, over 400 Pokémon to catch and host of new features, this isn’t the Alola you thought you knew.

The plot is initially largely the same with only a few novelty bits thrown in, that is until the Aether story arc begins. Things then become distinctly different, with new enemies and foes encountered, and a whole alternate series of events to those we saw in Sun & Moon. 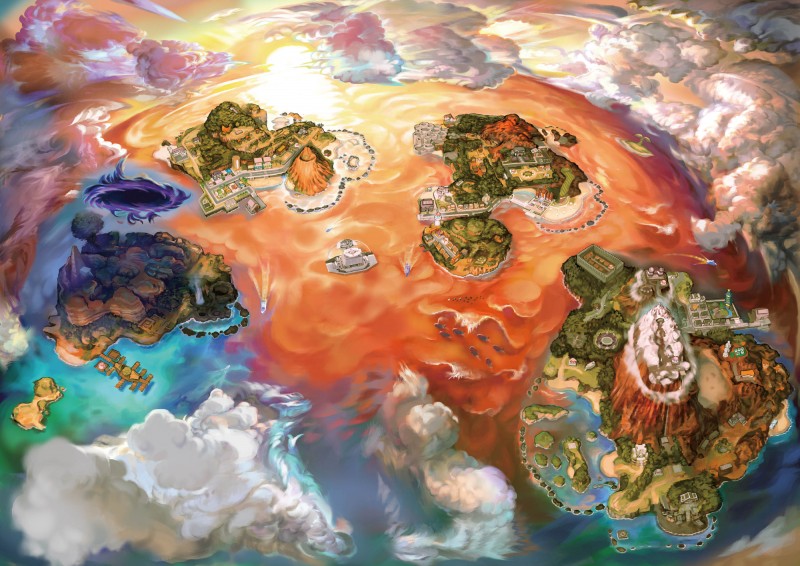 An official artwork featuring an aerial view of Alola with ominous clouds gathering. 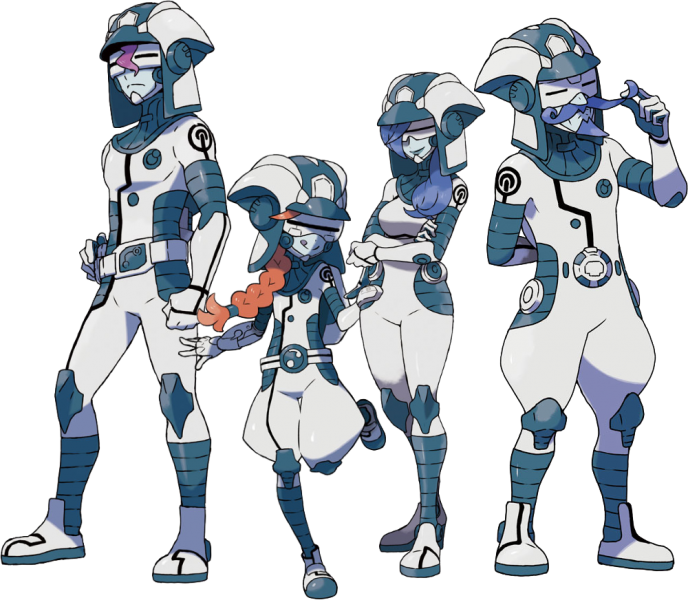 There will come a point when after initially studying the customs of our world (the Pokémon World) and how battles work, that they'll actually bring one of their own "Pokémon" in the form of UB Adhesive to the party!

There are a huge amount of new Z-Moves in USUM. These include Pokemon specific Z Moves, type specific Z Moves as well as Universal Z Moves which can be used with any Pokemon. Click here to check out the full list of all available Z Moves, which Pokémon they are compatible with and more.

Many years ago in the original core series Pokémon games you managed to defeat Giovanni and disrupt Team Rocket so badly that the organization disbanded. Giovanni vowed back then that he would restore Team Rocket to it's former glory. Decades later he follows through on that promise and he and his team are back, stronger than ever in the Alola region under the guise of Team Rainbow Rocket.

Not only that but this time Team Rocket are backed by basically every other criminal organization we've encountered to date in the core series Pokemon games, and it turns out Giovanni was bankrolling most of them the whole time!

USUM also introduce a new competitive battling facility called the Battle Agency. Similarly to the Battle Tree a player can choose to participate in 3v3 Pokemon Battles against reasonably tough AI opponents; the catch being that you can only take rental Pokemon into battle. The selection of rental Pokemon available is initially quite limited but you can unlock more by participating in USUM's ingame communication features with other players.

Once you beat your first Grand Trial you will unlock the ability to use the Mantine Surf service at Big Wave Beach. This is effectively a fun little way of getting from Island to Island, instead of catching the normal ferry you can opt to surf across to other Islands, doing tricks and stunts as you go to try to get high scores. The better your score the more BP (Beach Points) you'll be rewarded with when you reach your destination. Said BP can then be used to unlock rewards. 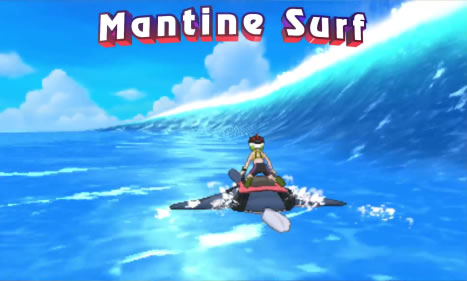 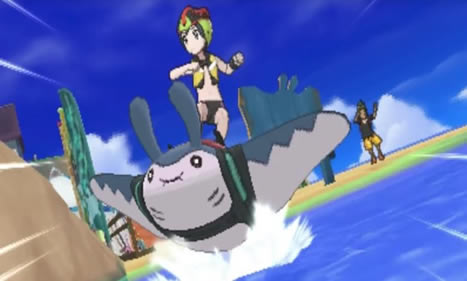 Winning battles at battle facilities such as the Battle Tree or the new Battle Agency will award BP. This currency can be spent on rare items for use in competitive Pokemon Battles, exactly as in Sun and Moon. However this time round you'll also be able to use BP to get new moves for your Pokemon, including special moves that can't be learned via the normal channels or even be obtained via a TM.

This special Dex becomes even more valuable to you in Ultra Sun and Ultra Moon, especially due to the addition of the new bonding mechanic. As you bond with your Rotom Dex it's personality will change, a cool little feature but not a game changer. That said once you reach a particularly strong bond with your Rotom Dex, its own form of Z-Power is activated meaning two Z-Moves can then be used in a single battle.

In addition to this theres also a new feature called Roto Loto, it's a mini game that essentially is a bit like a lottery, as when you play it you have a chance to win new special items; these items could have many different effects such as:-

Sun & Moon introduced us to Totem Pokemon, larger than average, fairly powerful Pokémon with their own auras that you'd battle at the end of Island trials. We weren't able to capture these Pokémon to fight alongside us in Sun and Moon however thanks to the introduction of Totem stickers we can get hold of our very own Totem Pokemon in Ultra Sun and Ultra Moon. The Totem Pokémon we can get have higher weight and are bigger, but when serving us they actually aren't anymore powerful than others of their specie.

You have to collect Totem stickers in order to get hold of them, these stickers are placed by the Trial Captain's and their assistants in different places all over the Alola region specifically for those taking part in their Island trials to seek out and collect. Collect enough of them and you can redeem for your own Totem Pokémon. The stickers can then be redeemed with Samson Oak, each game having it's own version specific Totems avvailable. Here's what you can get from each version:-

Good luck collectin' em all. But beware, Team Skull is known to try and take down these stickers in an attempt to disrupt trial-goers (out of bitterness for their own inability to complete their own Island trials.). 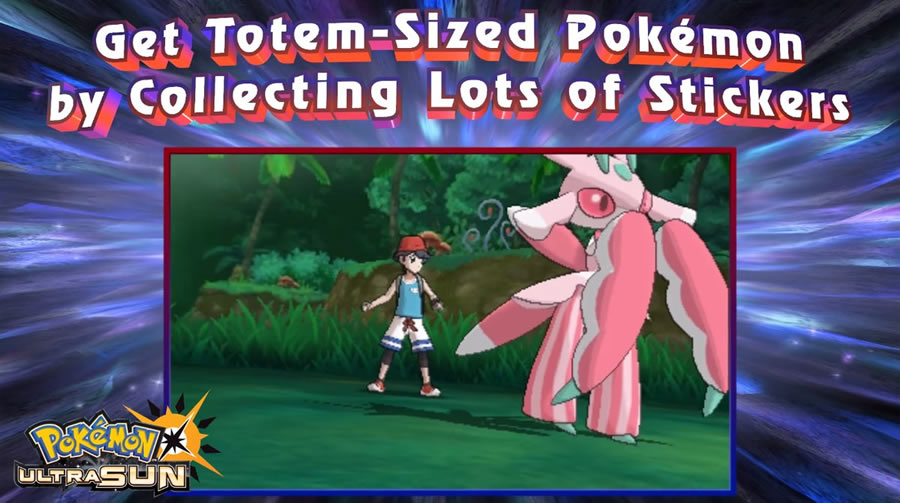 In the original Sun & Moon games these Ultra Wormholes were prominent within the games story; since it was them that allowed UB's to locate and enter the Alola region from their own worlds.

These Ultra Wormholes still exist this time round of course, but this time the player (when accompanied by either Solgaleo or Lunala) can travel through them and even visit the worlds from which the Ultra Beasts originated such as Ultra Megalopolis. While navigating these Ultra Wormholes you also have the chance to encounter powerful Pokemon and legendaries of past generations such as Mew, Lugia or Ho-Oh.

There are over 400 different Pokémon available between Pokemon Ultra Sun & Ultra Moon. Most notable about this is that between both versions of the games you are able to catch EVERY Legendary Pokemon from all generations to date, some of said legendaries as well as many others being version exclusive.

This form of Lycanroc is quite literally a cross between the other two forms and can learn the signature moves of both (Accelerock and Counter). It comes with it's own new ability too; Tough Claws which increases the power of it's direct physical attacks. Here's how to get this special form of Lycanroc:- 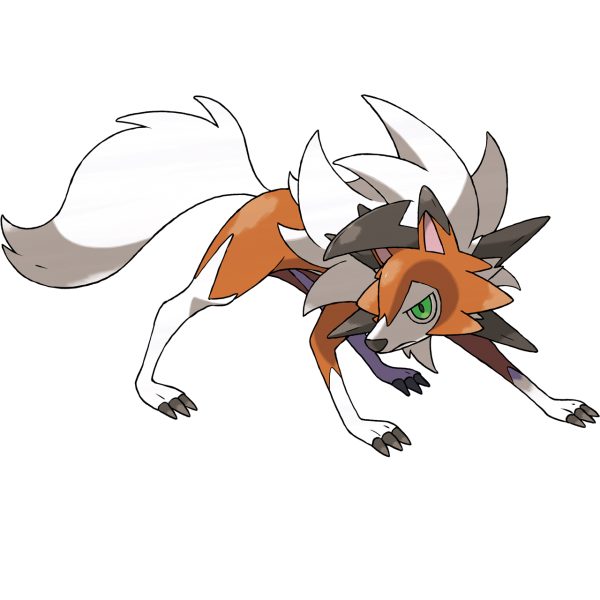 Getting the Special Rockruff

Dusk Mane and Dawn Wings Necrozma - Although the legendary Necrozma made a minor cameo in Sun & Moon we really didn't see that much of it. However this time round it takes a much more prominent role in the games plot, becoming one with each games mascot Pokemon. In Ultra Moon it will merge with Lunala to become Dawn Wings Necrozma and in Ultra Sun it will merge with Solagleo to become Dusk Mane Necrozma. 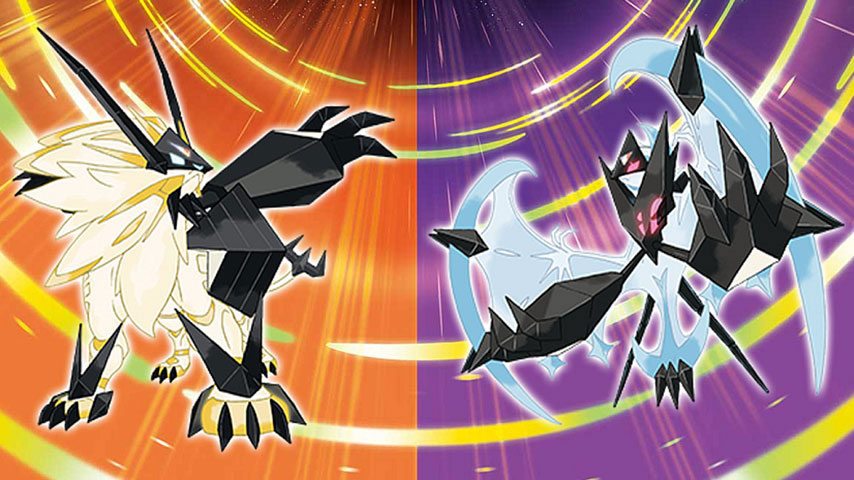 When the merge takes place the original Mascot Pokemon will take on a 'meaner' more upgraded look and will change type.

Both of these merged forms have the added ability Prism Armor, reducing the amount of damage recieved from super-effective attacks.

Ultra Beasts are powerful, unfamiliar Pokémon that travelled from other worlds via wormholes, they were initially introduced of course in Pokemon Sun & Moon and were a prominent part of the story. So it went almost without saying that we'd be seeing more of them in USUM. We've got all the UB's from the previous games plus at least three new ones including: 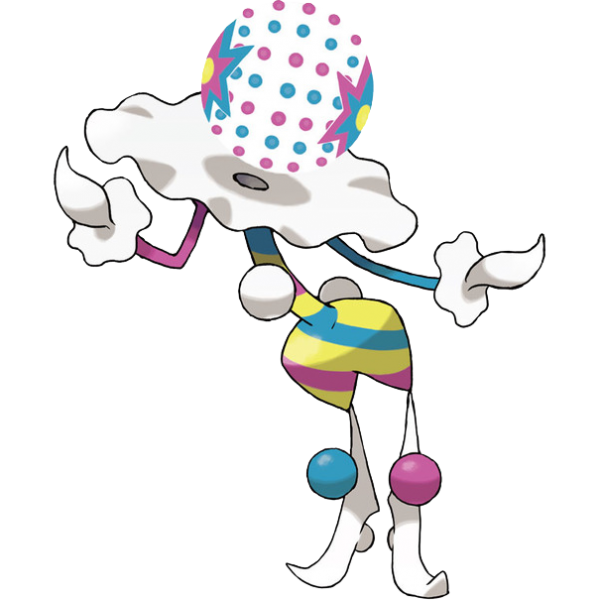 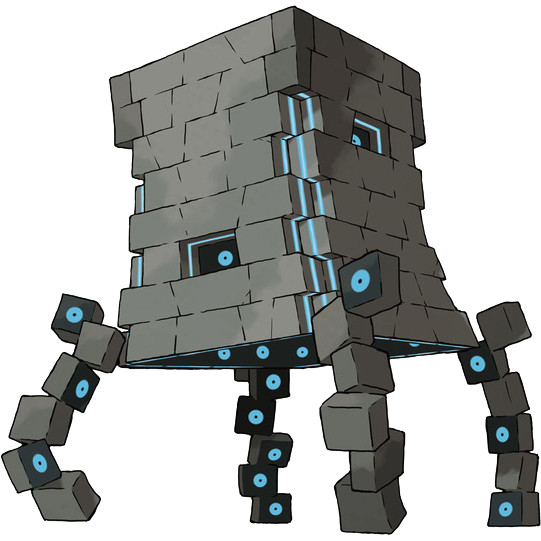 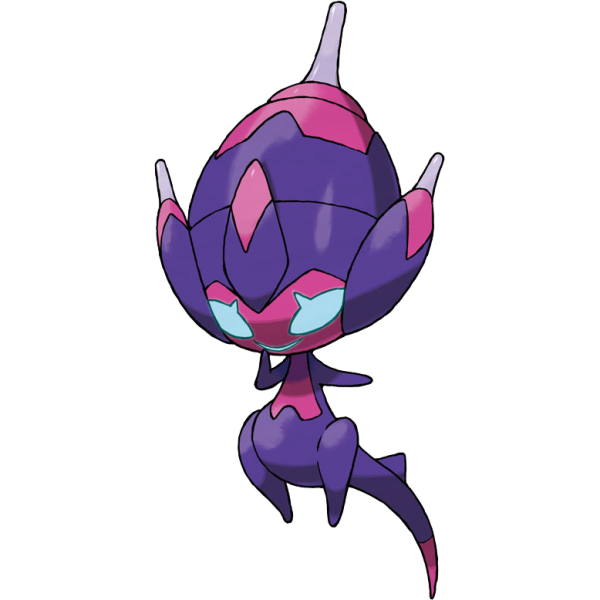 The new UB's: Burst, Assembly and Adhesive (from left to right)

UB Burst - the Fireworks Pokémon. This Pokémon's head is comprised entirely of sparks, it has the somewhat crazy ability to release and explode it's entire head at it's foe without taking damage itself. UB Burst is also known as Blacephalon. "UB Burst tricks targets into letting their guard down as it draws near with its funny gait, swaying this way and that—then shocks them by blowing up its own head without warning. Before they can recover their senses, it steals their vitality, which it’s said to use as a source of energy."

UB Assembly - the Rampart Pokémon. When this Pokémon becomes enraged or is engaged in a tough battle all of the eyes on the stones that comprise it's body begin to glow red. UB Assembly is also known as Stakataka. "While UB Assembly may appear to be made up of stones stacked atop one another, apparently each “stone” is in fact a separate life-form, and this UB is made up of an assemblage of these life-forms."

UB Adhesive - the poison pin Pokémon, this Pokemon's head is filled with venom which can be fired at it's foes from the poison needles atop of them. UB Adhesive is also known as Poipole. It is first used in battle by the Ultra Recon Squad. "UB Adhesive displays many emotions, and it’s said to be able to understand human speech if it spends enough time together with them." 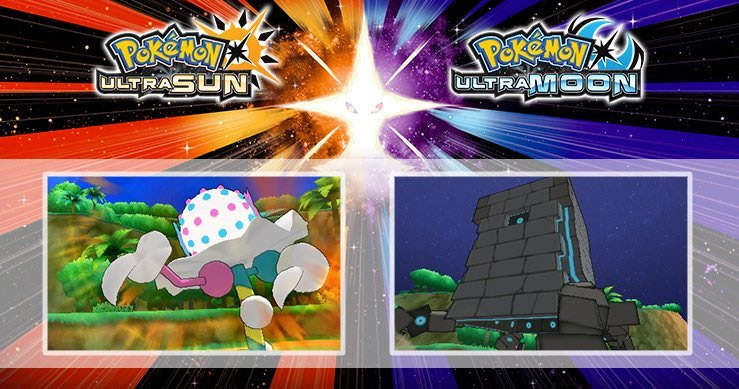 UB Assembly is an Ultra Beast exclusive to Ultra Moon where UB Burst will only be available to those playing Ultra sun. UB Adhesive will be available to players of both games.

A collection of videos from Pokémon Ultra Sun and Ultra Moon including trailers and TV Commercials.

Still waiting for the release of the first official sales figures, so I'll update that once they come in.

Interestingly USUM recieved quite widespread backlash from fans with many negative reviews in Japan within 24 hours of release; most of which were because people were of the opinion that there wasn't enough new content and they felt as though they'd essentially bought the same game(s) again. Whilst this is 'essentially' not far from the truth, this is a nice polished version of Sun & Moon with a wider variety of Pokemon to catch and lots of new features - so no different from any other gens sister games to the main core titles?

Fortunately many other fans and critics were quite understanding of that fact and there were some pretty good scores recieved from major review sites and fans alike, so lets check them out:-