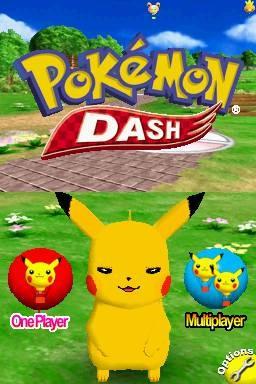 Released on Nintendo DS, Pokémon Dash is a Pokémon themed racing game, where the player uses Pikachu to race against many other Pokémon through different courses.

The game starts out with a training mode where the player gets familiar with the game mechanics, especially how Pikachu dashes by sliding the stylus on the touch screen. Within each course, the player must go through or above different Poké Ball checkpoints in order, to avoid them using any shortcuts. Other than regular races, the game does also include some fun event course, where Pikachu chases after a Munchlax using flying balloons, or ride on a Lapras back.

Become the Pokémon Dash Grand Prix Champion!
Make tracks as you put Pikachu through its paces around the course. Race against the clock and other Pokémon rivals passing the checkpoints as you head toward the goal. Fast-Action Fun!

Race your rivals! - You can race as Pikachu in a whole new way using the stylus slide-action to reach the goal in record time. Don't be beaten by your rivals! Meet Munchlax! - It's a mad dash racing against rival Pokémon. Don't be surprised when you run across an unfamiliar face. Meet Munchlax, the pre-evolved form of Snorlax. Connect for more courses! - Hook up with Game Boy Advance Pokémon versions: Ruby, Sapphire, Firered, Leafgreen, and Emerald to create new courses in the shape of your GBA Pokémon!

Up to six players can compete using their own Pokémon Dash Game Card!

There 18 Pokémon characters featured in the game with Pikachu being the only playable one:

Pokémon Dash can be played both in Single Player vs the AI, or in Multiplayer vs other players.

The Grand Prix is the main mode of the game, where the player competes against other Pokémon in 5 different Cups. Each Cup has a set of different courses with various field mechanics. Within these courses, Pikachu has to go through the different checkpoints in a certain order and aim for the first spot.

There are obstacles on the way, like Grass and Shallow Waters which slow Pikachu's movements, along with speed boosts which will help increase its speed for a limited duration. Some courses feature many small islands separated by deep waters. Pikachu can travel from one to another by riding on Lapras' back or hitting some Diglett that will give them Flying Balloon, allowing Pikachu to go airborne and fly to the next checkpoint.

The Grand Prix has three different difficulty settings: Regular, Hard and Expert. In order to access the Hard difficulty, the player must first finish the Grand Prix in Regular, while Expert becomes available after finishing it in Hard. As the difficulty increases, the enemy Pokémon change completely and become way faster.

In this mode, the player tries to complete the course the fastest possible, with no opponents to compete against, as only Pikachu is present on the course. The player may choose any course they have already completed.

The Multiplayer Mode allows players that own the game to play against each other in a course of their choices, that they have already completed. Up to 6 players can join the game.

There are three different events that can be unlocked through by downloading certain events and they are as follows:

Flying Pikachu: A mode solely based on the flying balloons feature.

Pikachu & Lapras: This mode revolves around Pikachu riding Lapras' back for an extended period of time.

Compatibility with other titles

The player can link Pokémon Dash to the third generation Pokémon games, by inserting the third generation game in the Nintendo DS' GBA Slot. This will let them pick any Pokémon from their current party in that game and use its Emerald Sprite as a course, allowing the them to play as many as 420 new courses. This feature is unlocked after the player fully completes the Grand Prix Mode, at least once.

Check out these Pokemon Dash videos including TV Commercials, Trailers and the games intro.

During the first three weeks of its release, the game sold around 115 thousand copies in Japan, 44 thousand in Europe and nearly 58 thousand in the USA.

The game wasn't that well received, as it mostly gained a combination of bad and average ratings on major review websites. Let's take a look at these reviews:


Overall, the game was quite disappointing as the first Pokémon game to be released on the Nintendo DS, with boring repetitive gameplay and unattractive graphics.