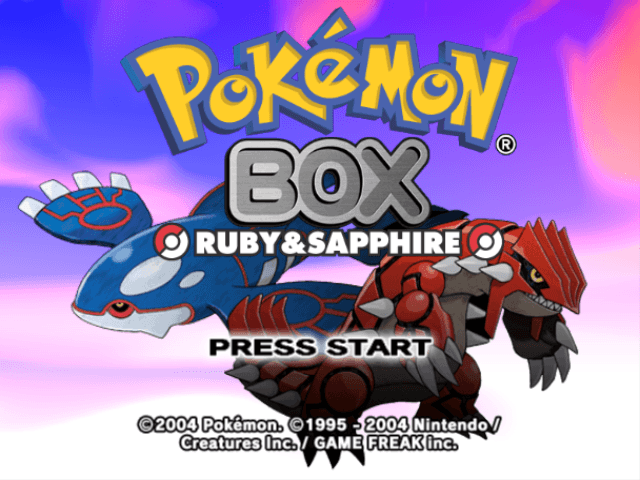 Pokémon Box: Ruby and Sapphire is a spin-off game released on GameCube that is more of a companion tool to be used with the third generation games than an actual game. It is probably one of the rarest Pokémon games, due its limited release and the few ways one can get a copy. In fact, it was only released in New York's Pokémon Center and its respective online store.

The game was later on released in Europe as Pokémon Memory Magic, but this version could only be obtained with Nintendo Loyalty Program's Points for Europe. Another way to get the game was buying the Pokémon Colosseum Mega Pack. Due to its extreme rarity, a used version of the game would now cost nearly a hundred US Dollar. As stated earlier, Pokémon Box: Ruby & Sapphire is mainly a storage system hosted by Brigette, sister of Lanette the PC storage system host in the Hoenn region. Linking it to the third generation Pokémon games ( Ruby, Sapphire, Emerald, LeafGreen and FireRed) gives access to many useful features, as a very big Pokémon storage, extra Pokémon eggs and a show case mode. Similar Pokémon games were released afterward, such as My Pokémon Ranch on the Nintendo Wii and Pokémon Bank on the 3DS.

Pokémon Ruby and Pokémon Sapphire: Before being able to put any Pokémon into Pokémon Box, the player must first acquire the Pokédex from Professor Birch. Additionally, to be able to retrieve Pokémon the player didn't deposit from Ruby or Sapphire into Pokémon Box, they must have at least 100 Pokémon caught on their Pokédex.
Pokémon Emerald: Before being able to deposit Pokémon in Pokémon Box, the player must have first received the national Pokédex. At least, 100 Pokémon must be caught and shown on the Pokédex to be able to withdraw Pokémon they didn't transfer from Pokémon Emerald to Pokémon Box.
Pokémon Fire Red and Pokémon Leaf Green: Transferring Pokémon into and from the game would require that the player finishes the Sevii Islands quest and activates the trade option with the games of the Hoenn region (Pokémon Ruby & Sapphire). Additionally, there's another withdrawal condition, which is to catch a 100 Pokémon just like the other third generation games.

How it interacts with other Pokémon titles

The game was mainly conceived to function with Pokémon Ruby and Pokémon Sapphire, but it can also be linked to Pokémon Emerald, Pokémon Fire Red and Pokémon Leaf Green. As mentioned above, it allows principally, Pokémon players to store their Pokémon from the mentioned games, using stylish and fun methods of display. 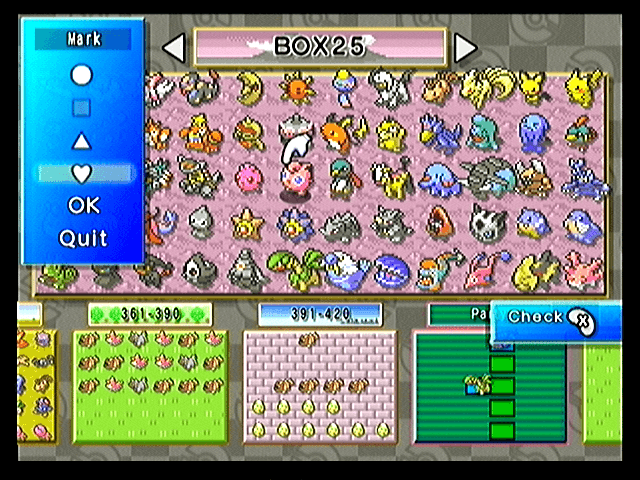 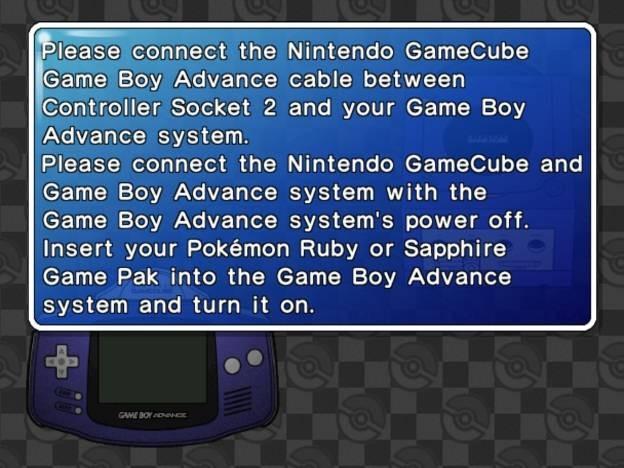 An example of a Pokémon Storage Box, full of Pokémon (left) + instructions on connecting the GBA to the GameCube (right)

Aside from its unique features, Pokémon Box : Ruby & Sapphire also offers its player Bonus Eggs as a gift. These eggs can be obtained after reaching a certain number of stored Pokémon within the game. They can, then, be transferred to the other Pokémon games, where they are hatched in the usual way (walking around while having the egg in the player's current team). Each egg contains a different Pokémon but with a unique skill that it can't normally learn, which makes the eggs worth the effort.

Check out these videos relating to Pokémon Box: Ruby and Sapphire including commercials, trailers and gameplay.

A Japanese TV Commercial for Pokémon Box: Ruby and Sapphire

A good quality video showing some of the features in Pokemon Box RS, by ShadowMario3

Judging by the number of the sold copies, the game didn't achieve exceptional sales, like the third generation titles it functions with, which was mainly due to its limited release. Pokémon Box : Ruby & Sapphire managed to sell an overall total of around 0.28 million copies, which is still quite great for such a rare game. On the other hand, if we consider the game cost, we'd see that those who did buy it successfully gained a lot of value due to the rarity and limited availability of the title. In fact, upon its release the game cost around 20 US Dollars, and a used version of it now scales from a hundred US Dollars up to three hundred US Dollars, making it one of the most expensive Pokémon titles to be released.

Knowing that the game isn't a game after all, but a storage solution to the other games, it was considered by some people as secondary and optional. Thus, it wasn't that well received and scored mediocre scores on major review websites. Let's take a look at those scores:


Overall, the game can be considered average at best and an optional game that only a hardcore Pokémon fan would generally be interested in.