Pokémon 4ever - Celebi: Voice of the Forest
Login

Pokémon 4ever - Celebi: Voice of the Forest 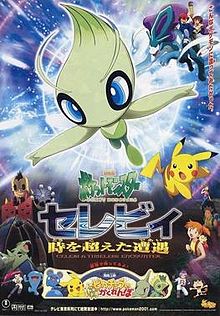 Pokemon 4Ever: Celebi - Voice of the Forest or when translated directly from the Japanese versions title; Pocket Monsters the Movie: Celebi A Timeless Encounter is commonly known to most simply as Pokemon 4EVER and is the fourth movie in the pokemon franchise.

The movie was directed by the anime series chief Kunihiko Yuyama again and maintained most of the predecessors voice actors from the anime: Rica Matsumoto, Ikue Ōtani, Mayumi Iizuka, Yūji Ueda, Megumi Hayashibara, and Shin-ichiro Miki in the Japanese versions.

The film was adapted to English for international audiences by 4Kids Entertainment and distributed by Miramax Films who took over from Warner Bros Family Entertainment. The English adaption of Pokemon 4Ever was directed by Jim Malone, written by Norman J. Grossfeld and voiced by the voice actors from the English adaption of the anime: Veronica Taylor, Eric Stuart, Rachael Lillis, and Maddie Blaustein.

Of particular contrast between the Japanese and international release versions of the movie was the characters voices, the Japanese release had come under fire for the characters sounding too cartoony in a setting that was supposed to be... well quite frankly a bit more epic sounding. 4Kids did a good job in taking this onboard and rectifying it for the English adaptation making the characters sound less cartoony and a bit more serious and appropriate to the story. Future Pokemon movies such as Genesect and the Legend Awakened would draw inspiration from this many years later.

On the DVD released version an exclusive e-Reader card of Suicine was included as a bonus gift and a special mini feature called Pikachu's Pikaboo was featured as a bonus feature.

Around a decade after it's initial release Pokemon 4Ever was re-released a number of times, in the UK for example Optimum Home Entertainment released the DVD again on May 9th, 2011. Then on April 2nd, 2012 Studio Canal released a double Pokemon Movie DVD pack featuring Pokemon Heroes and Pokemon 4ever, this release was timed to come just a week before the dual Pokemon Black & White Movies; Black Victini and Reshiram and White Victini and Zekrom came out. Pokemon 4Ever was also aired on Cartoon Network in the USA as part of a special Pokémon event that they were running in 2005.

A celebi is in a forest running from a persistant pokémon hunter. A young boy enters that forest and is warned by a young lady about the Voice of the Forest. As the young boy meets and tries to protect the celebi, it uses its power to time travel taking the boy with it. 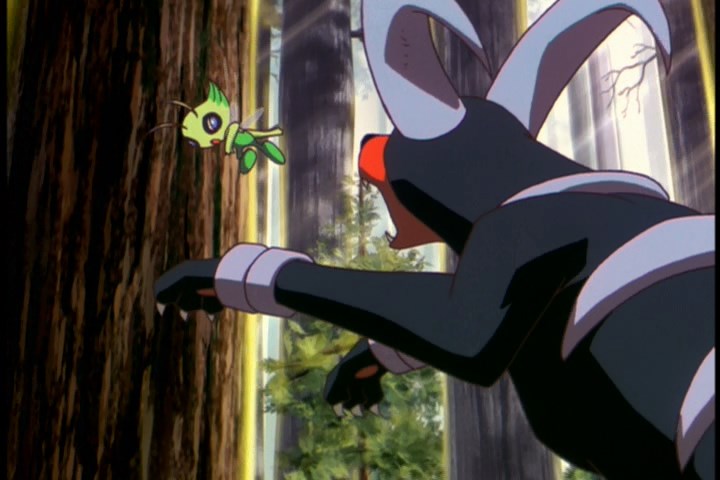 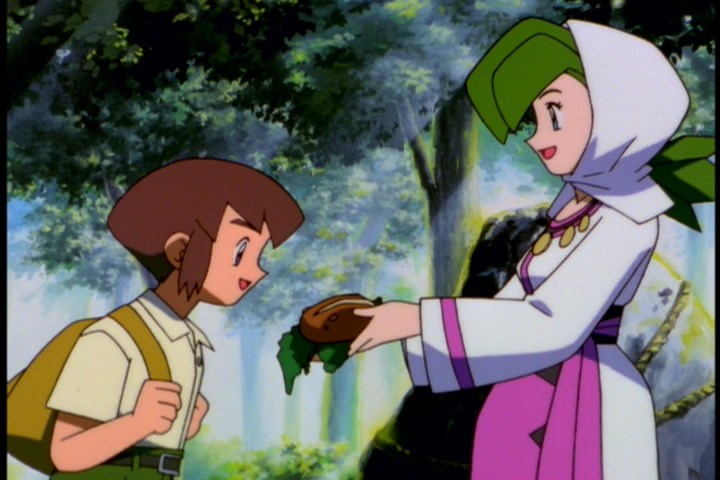 Forty years into the future, a powerful Team Rocket member coerces the Pokémon hunter into revealing where he had met that celebi. The masked grunt has a giant mecha and is armed with Dark Balls which will turn a pokémon evil and force it to level up to its maximum potential. 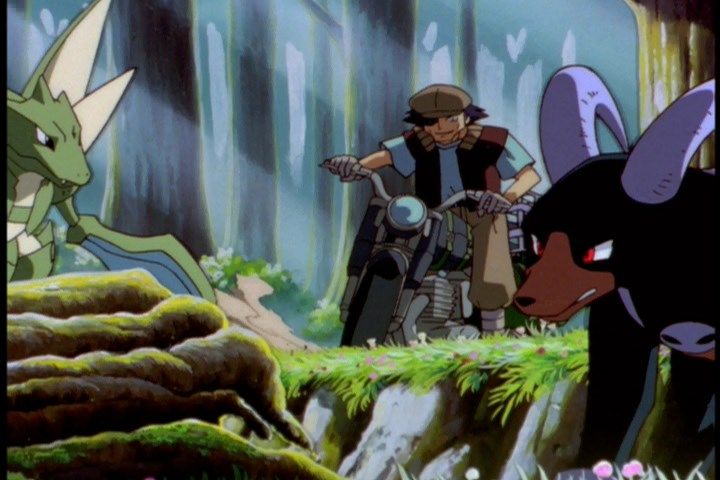 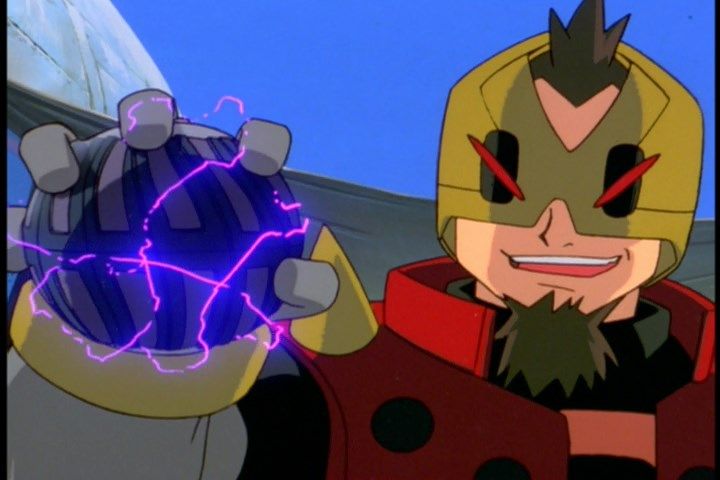 Meanwhile, Ash and company decide to explore a forest near Arborville in Johto. Ash calls Professor Oak about sighting a strange pokémon that is identified as a suicune. The professor reveals that he had seen one of these rare legendary pokémon once himself. When they arrive at the forest entrance, an elderly woman warns the travelers about the Voice of the Forest and meet her granddaughter, Diana. Soon after entering the forest they hear a strange sound that guides them to the young boy, Sammy, who is unconscious. The grandmother recognizes him and tells the group about the celebi who protects the forest and the Lake of Life in the center of it. Sammy is worried that the celebi still needs help. 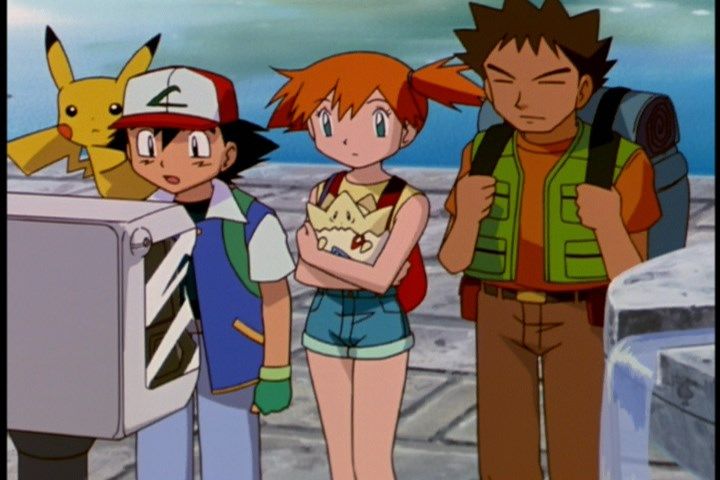 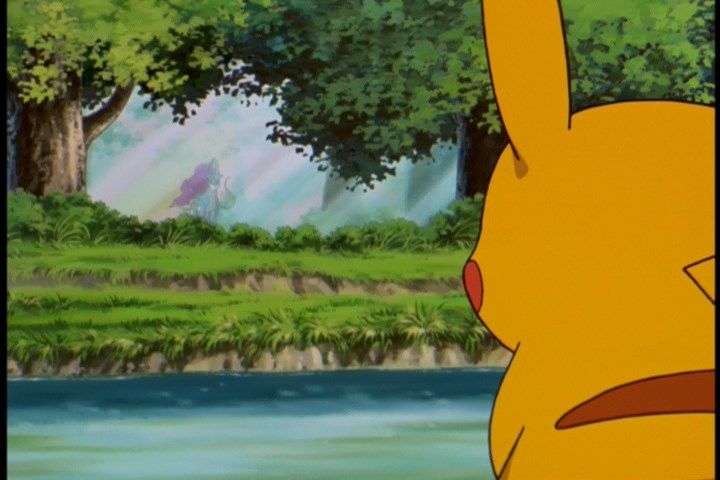 They recover the celebi only to be stopped from getting it to a PokéCenter by the Team Rocket grunt with the mecha, who is revealed to be the Iron Masked Marauder. They are able to escape him, and are guided by a chain of pokémon to the Lake of Life where they are able to restore the celebi to full health. While camped for the night Sammy shows Ash his sketch book of drawings of the Pokémon he has seen which now has a drawing of the sleeping Pikachu and the celebi. 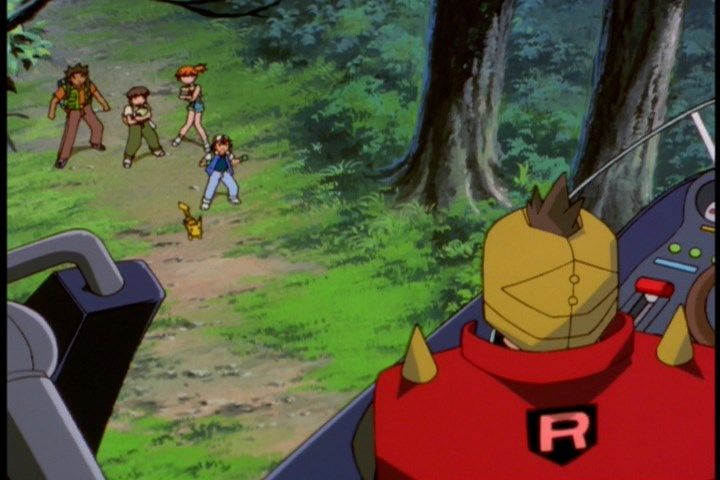 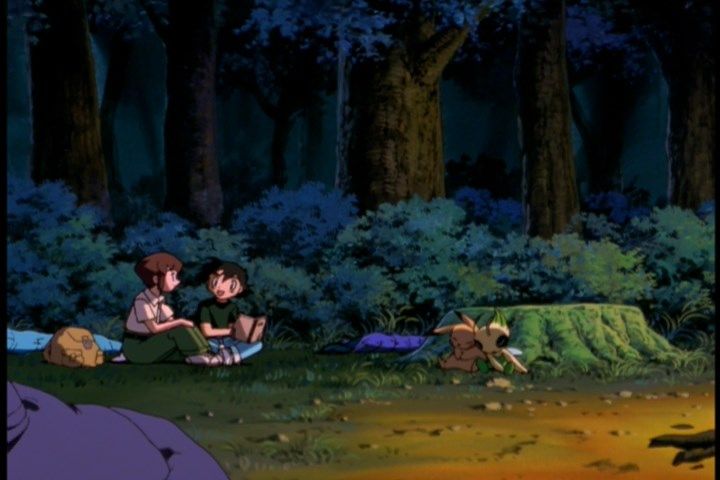 The next morning Iron Mask is able to catch the celebi with a Dark Ball. Releasing the dark celebi, Iron Mask has it create an all-natural mecha powered by the dark celebi. The mecha then starts to destroy the forest and foul the lake. Iron Mask now decides that he no longer needs to serve Giovanni. Ash, Sammy, and company are joined up by Diana, her grandmother and an air ship pilot. The suicune is also aware of the danger and rushes to the forest to rescue the celebi. 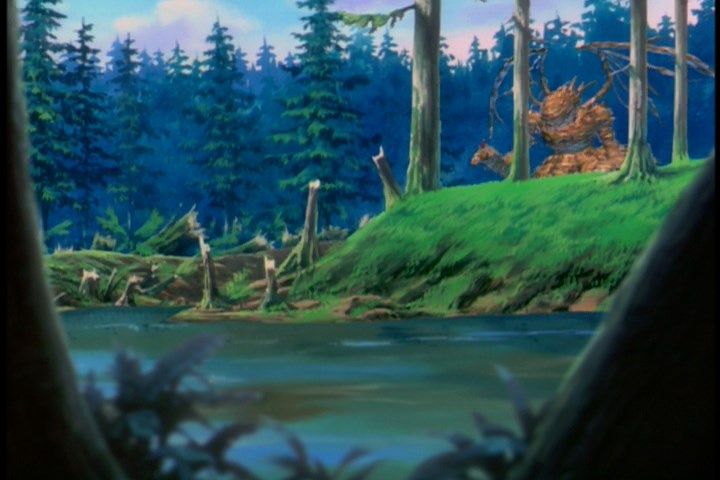 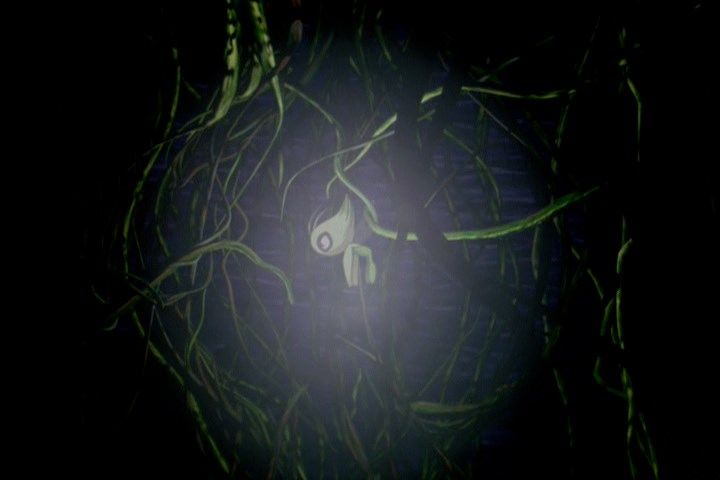 With the help of the suicune and Brock’s onyx, the boys are able to get inside the mecha to help the celebi fight the control of the Dark Ball. Eventually the celebi does this and the feedback destroys the Dark Ball. But celebi is now dying, and the poisoned water of the lake cannot heal celebi. Suicune uses its power to purify water to restore the lake, but celebi is too far gone. 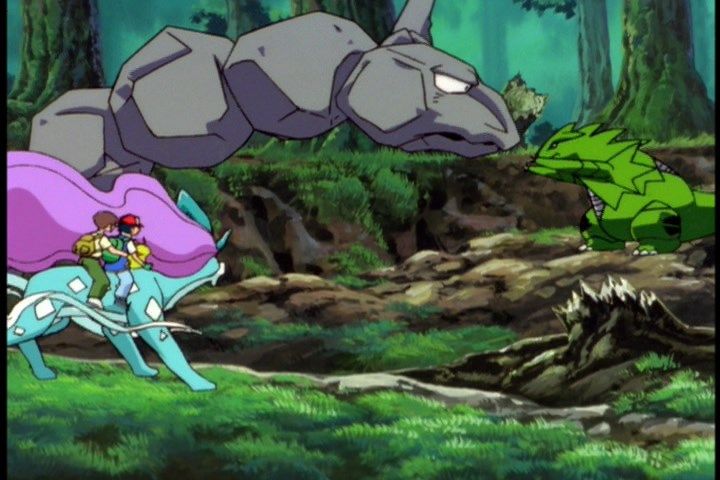 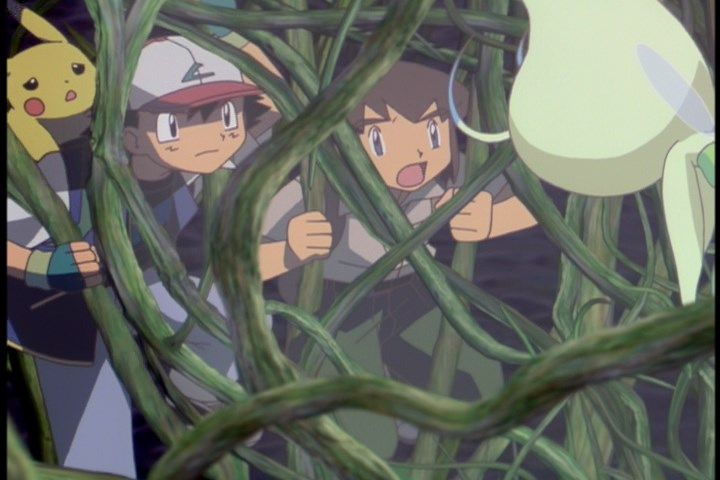 Ash, Sammy and their friends are grief stricken, and the pokémon of the forest, including the suicune, cry out in despair. Just then another voice of the forest is heard as a portal in the sky opens up. Hundreds of celebi throughout time and forests appear to heal the sick celebi. They return and the celebi flies about in joy. But Iron Mask makes one last desperate attempt to capture celebi only to be stopped by Ash and Pikachu, and captured by the forest pokémon. The suicune takes its leave, and the celebi and Sammy return to their own time. 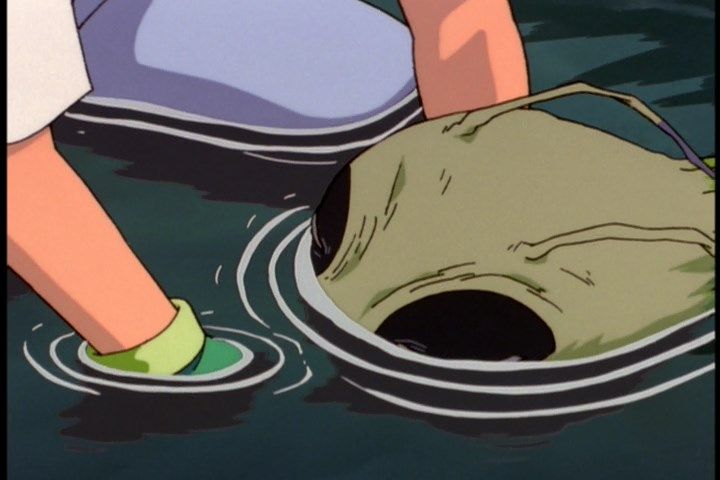 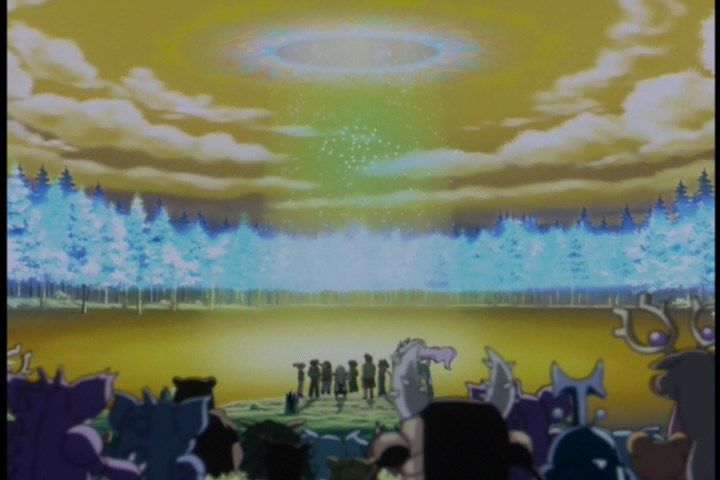 Ash calls Professor Oak and everyone tells him about the adventure and the rare pokémon they have seen. Professor Oak then cheers Ash up by telling him he will surely see Sammy again, calling him by name without being told it. The kids are amazed at his knowledge as they board the ferry for their next destination. Professor Oak is then inspired to reminice by paging through his old sketch book, pausing at his sketch of a pikachu and celebi sleeping back-to-back. 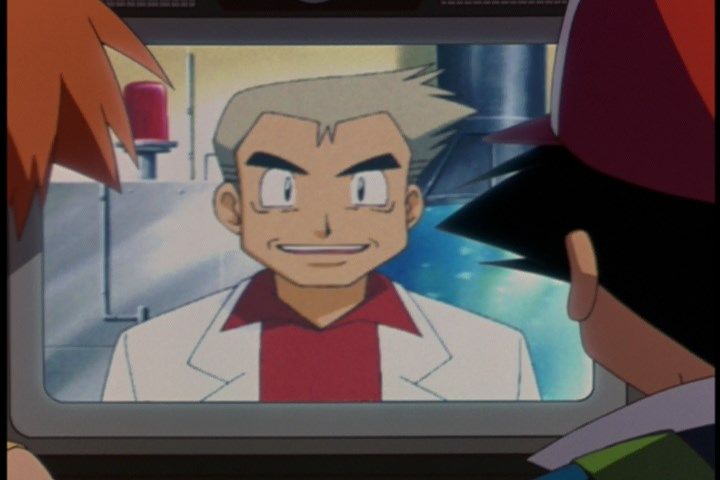 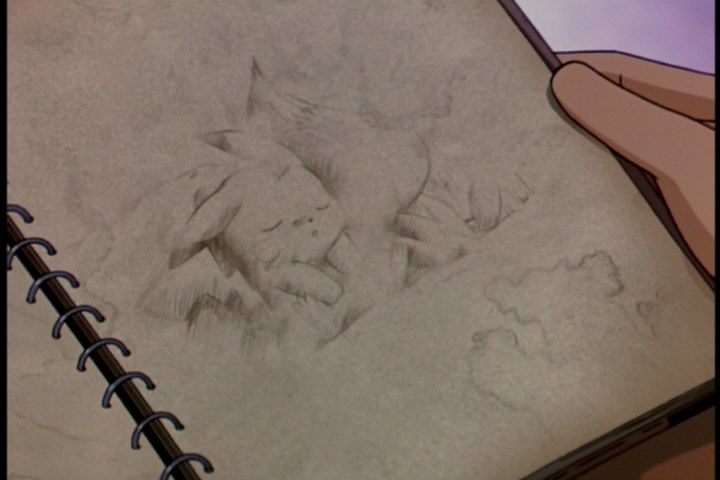 There are always those who seek to contain and capture rare Pokémon—and there are those who would protect these special Pokémon from evil forces. Forty years ago that very thing occurred when Celebi found itself fleeing a vicious hunter, and a young Trainer named Sammy rushed to the rescue. They vanished—becoming yet another strange legend that the townspeople tell.

In the present day, Ash and friends arrive in the forest, and while the story of Sammy and Celebi might seem like just that at first—a story—they find out the truth when both boy and Pokémon turn up again! Though both recover from their harrowing ordeal of forty years past, things aren't necessarily getting better—there are still people looking to capture Celebi! This time it's the Iron Masked Marauder, and his plan might just be the cruelest one yet. He's equipped with Dark Balls, which make any Pokémon captured in them mindlessly obedient and evil. Can Ash, Sammy, Misty, and Brock withstand the power of a possessed Celebi, and restore it to its true self?

Check out the official trailer for Celebi, Voice of the Forest below.

There were a few different trading cards given out with admissions to cinemas/theatres and DVD/VHS releases. The cards were all Black Star promos and were produced by Wizards of the Coast. Check them out:-


The two left cards were given out when people bought tickets to theater showings of Pokemon 4Ever in Japan and the rest of the world respectively. The Suicine promo card was bundled with the DVD and VHS releases of the movie, a very similar card to the Suicine promo was released in the Aquapolis set of the Pokemon TCG.

The above e-Reader insert was included in the pack with Western releases of the Celebi Black Star Promo given at theatrical showings of the movie. 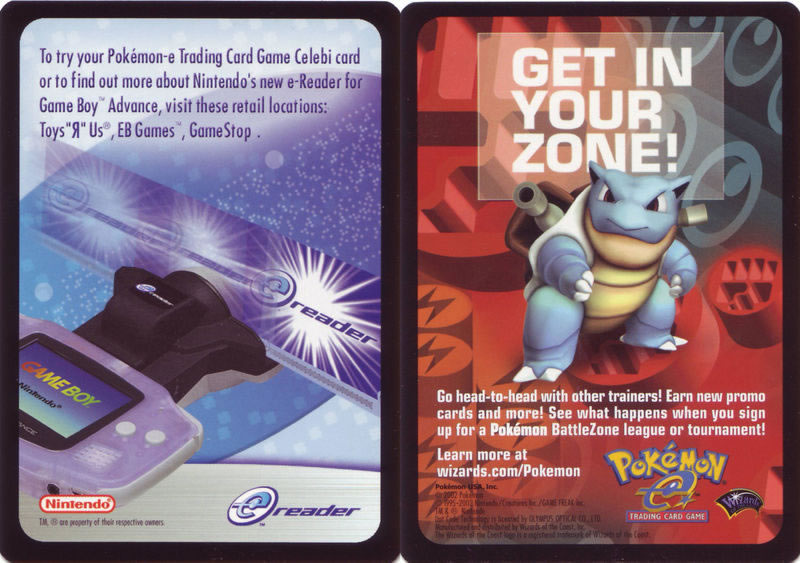 The English and Japanese movie posters for Pokemon 4Ever can be found below. We're also on the lookout for any magazine scans/ads from gaming/movie magazines during the build up to the moies release, if anyone has any please email luke. Thanks! 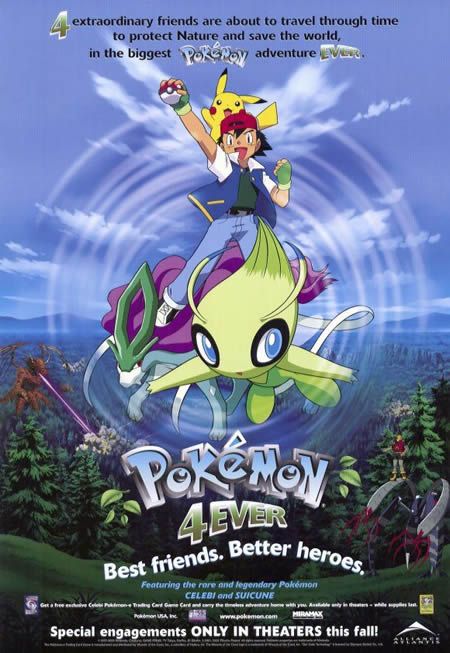 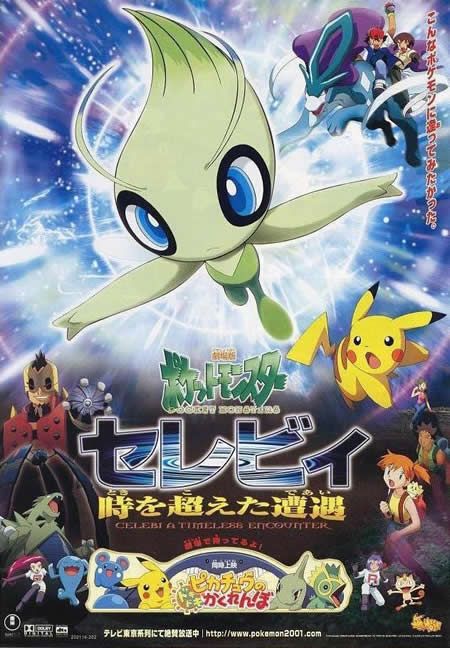 Who cares what someone who knew/cared nothing about Pokémon thought? People liked the movie enough to pay for movie tickets and buy the videos. The movie made enough money to encourage The Pokémon Company to continue making fifteen+ more Pokémon films in this series. –White Phoenix