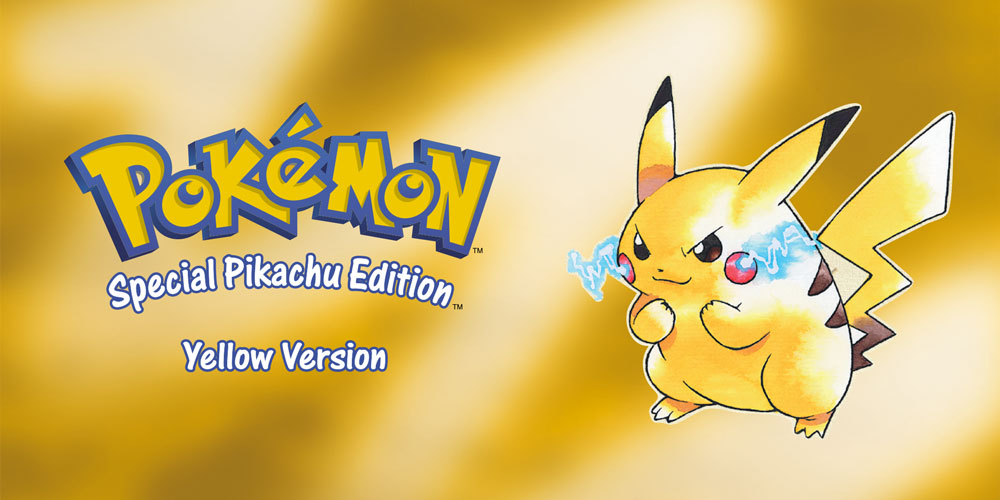 "Pikachu, I choose you!"

Pokemon Red and Blue were both huge successes, and Nintendo decided they were going to milk this franchise for all it was worth. The result was an updated version of Pokemon Red and Blue that incorporated some elements of the Anime into it. Yellow version, as it was called, proved to be a critical and commercial success. It made very few, small changes to some of the game while keeping it the same as Red and Blue. Same plot, same battle system, same Pokemon. When Yellow version was announced, parents cringed as their children were nagging them to get that newfangled "Pokey Man" game. Parents would continue to not understand, and the children would continue to buy into the collective hype, plus the same addictive gameplay that they had experienced before, but with a few new features.

Story: 10/10: In a world filled with mysterious and ancient creatures known as Pokemon (short for "Pocket Monsters"), you, Ash Ketchum must go on a journey to capture all 150 Pokemon and defeat the Elite Four, an elite (as denoted by their name) group of Pokemon trainers. Pokemon have been domesticated for the post part, akin to cats and dogs in our world. But like cats and dogs in our world, there are plenty of wild ones as well. Pokemon are often diminutive creatures, though some reach skyscraper levels of size. They are caught in the wild and trained to fight against wild Pokemon and the Pokemon of other trainers. Scientists have developed a way of capturing Pokemon of any size by the use of a small, baseball-sized sphere called a Poke-ball. The Poke-ball stores the Pokemon as energy and they can be called upon whenever the trainer wishes. However, if their trainer is abusive or cruel in some way, or if they have angered their Pokemon for whatever reason, they might not desire to come out. There's a delicate relationship that must be maintained between trainer and Pokemon, and Pokemon Yellow delves more into that aspect far more than the previous Red and Blue versions did.

Ash at the beginning of the game of the other two, had the ability to pick between one of three starter Pokemon: Squirtle, Bulbasaur, and Charmander. However the story has been slightly tweaked in this version to meet that of the Anime. Ash wakes up late, and thus misses out on picking his starter Pokemon, as other trainers have collected all of the ones available. Professor Oak, Ash's mentor, does have on started Pokemon left however. Oak, having faith in Ash, gives him Pikachu (the franchise's mascot), an electric rodent that is generally extremely rowdy and seemingly untameable. Ash takes Oak up on the offer and Pikachu becomes Ash's first Pokemon. Pikachu however doesn't like to be kept cooped up in Poke-balls and Ash allows him to walk around freely. Pikachu follows Ash around in his adventure to capture all 150 Pokemon and become the Pokemon master.

Along the way, you'll encounter Ash's rival Gary (who happens to be Oak's grand-son). Gary has been competing with Ash since they were both children and he's pretty arrogant. After Ash and Pikachu school Gary, Gary sets off on a person mission to defeat Ash. You'll also encounter other Pokemon trainers who want to try their luck against you. Or sometimes they'll feel that you're invading their turf and it should be settled with a Pokemon battle. There are some out there with even less scruples, notably the criminal organization Team Rocket. In the Red and Blue versions they were nameless, all except for the organization's leader, Giovanni. Team Rocket would undergo a small change in Yellow version as well, allowing you to run into Team Rocket's flagship members, Jesse, James, and the talking Meowth.

Gameplay: 10/10: The game plays like the standard RPG at the time. You walk around with a bird's-eye view of the over-world on your quest. Occasionally you'll get into a random battle if you go into a dangerous area. These areas include high grass, bodies of water, and caverns. Upon entering the battle, whichever Pokemon is the first in our roster is called out first to do battle with an enemy Pokemon. Your Pokemon and the enemy Pokemon each have a health bar that goes down upon getting hit with an attack. Doing enough damage in battle will cause the enemy Pokemon to faint and thus, you win the battle. Alternatively, you can use a Poke-ball to catch the enemy Pokemon once it's been weakened enough. You'll have to capture all 150 Pokemon to fill up your Pokedex (a small, hand-held encyclopedia of Pokemon), which is one of the main objectives of the game. This can be addicting as tons of people have a compulsion for collecting things. To collect all of them, you'll have to trade with other people who have the earlier versions of the game, Red and Blue, by using a link cable.
In battle you'll have four actions to choose from. The first of which is "Fight" which will allow you to select an attack for your Pokemon to execute. Then there's the "PKMN" option which will allow you bring out one of the other Pokemon in your roster, sending the other one back to it's Poke-ball. The "Item" option is pretty self-explanatory, allowing you to use items in battles such as potions or Poke-balls. And then finally there's "Run" which will let you flee from the battle. However you can not flee from a battle if you're fighting another trainer. If you get into another trainer's line of sight, they will initiate a Pokemon battle will you. You'll also have to make your way around to the various gyms to obtain badges from the gym leaders. Upon obtaining all eight badges, you'll be able to enter Victory Road, a cavernous, Pokemon-rich area that leads to the Elite Four.

Yellow version made some small changes over the original Red and Blue versions, in that Pikachu is the Pokemon you get right off the bat. As stated earlier, he doesn't like to be cooped up in inside of a Poke-ball and opts instead to follow you around. Turning around and pressing the action button will bring up a box that show's pikachu's face that show what kind of mood that he's in. Depending on his mood, he may or may not obey you more often in battle. You'll have to keep him happy by taking good care of him so you'll know that he'll always obey. Another change is that you'll sometimes encounter Jesse, James, and their talking Meowth from the Pokemon Anime. Just like in the Anime, they want that Pikachu you have after witnessing it's power and want to snatch it for themselves.

Graphics: 10/10: Red and Blue were great as it is in this department, but something I noticed was how well they animated Pikachu upon bringing up his mood box. His animations are extremely fluid and almost looks like it's straight from the cartoon. In addition to that the Pokemon sprites are drawn very well and the landscape is fairly detailed. The backgrounds for battle screens are extremely lacking but this was an 8-bit game and the graphics would have to suffer some area for them being so great in others as both the cartridges and the Gameboy itself were pretty limited in what they could do. But it definitely felt like they tried their hardest and made full use of everything at their disposal.

Audio: 10/10: Yellow version features all of the original catchy tracks from Red and Blue, and all of the sound effects from the originals as well. Fire moves sound like something burning, and water moves sound like waves crashing, and wind moves sound like gusts of wind. What should also be noted here is that instead of the usual odd sounding battle-cry for Pikachu, they have him shout "PIKA!" when called in battle. On top of that, talking to him will evoke similar vocal responses. For 8-bit, in my personal opinion, this was an amazing feat and was probably pretty hard for the programmers to pull off. Kudos to them!

Overall: 10/10: Pokemon Yellow fed into the Pokemon craze by slightly altering the original two versions of the same game. Instead of trading with others get the other starter Pokemon, you can find all three from the last two games at some point in this one. Pokemon Yellow introduced Jesse, James, and Meowth into the game as well as Pikachu himself, the series' mascot. Nintendo had a huge campaign for the release, going so far as to sell a Pikachu colored Gameboy Color. Pokemon Yellow is just as great as Red and Blue and if you liked them, you should get this one as well! If you're an RPG fan you'll probably enjoy this game as well.