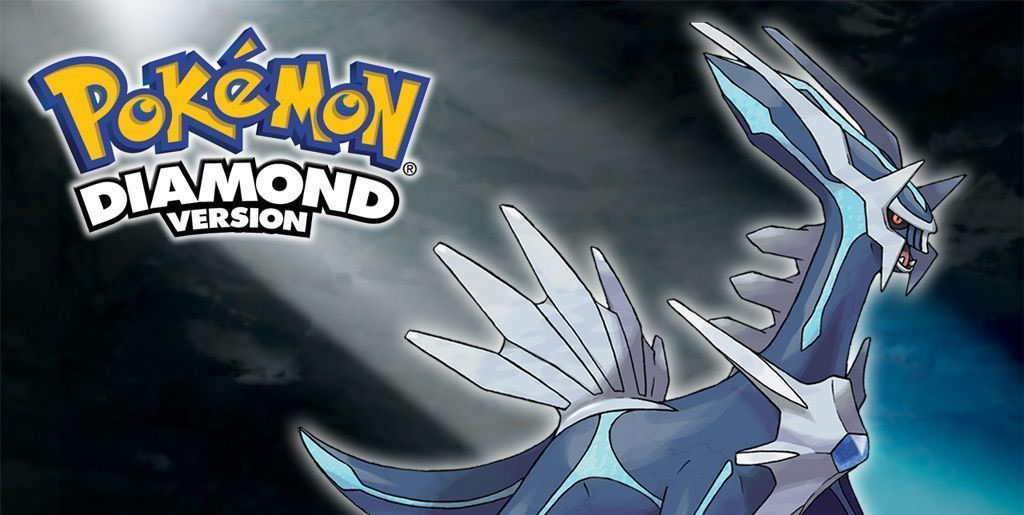 
"Slather honey on a tree, and a Pokemon appears. Slather this game, and I appear!"

Now, I'm serious when I say this. I honestly am. I just recently got a Nintendo DS (late into January of 2008). Just now. I know everybody else has one, but I just now got mine. And it's the original, not a Lite. And I like it. So what? Anyway, the first game I chose for this was Pokemon Diamond. I am a PokeManiac. I must know everything about every Pokemon. I played it, and the game is great. Everything is so new. I wil put this into five categories: Plot, Graphics, Sound and Music, Gameplay, and Aftermath Fun.

PLOT: 9/10. Team Rocket has been a bad group, but they never made a good plot. Team Magma/Aqua were even better, serving to conquer the world by awakening Groudon/Kyogre. But now, Team Galactic, funny hair and suits and all, want to conquer the universe by awakening Dialga (Palkia for Pearl). Their leader shows no emotion at all (he says it weakens people) and reveals precious little of his plans to you until the very end. Also, his grunts have more personality to them than the Team Rocket grunts. Some complain, others serve loyally, and some complain some more. Okay, aside from the evils teams aiming to conquer the universe, you occasionally meet up with Prof. Rowan's assistant, who encourages you and gives you advice. You also occasionally meet up with your impatient rival, who challenges you to a battle to see if he's the toughest trainer in the world just about every time. Of course, he's not, because you beat the Elite Four and become Pokemon Champion, and he gets the boot. Theoretically, he's your friend, but you don't like him much after every encounter. (That changes, however, when two Galactic commanders are about to pummel you and he pops up right in time to battle by your side.)

GRAPHICS: 9/10. Although it sticks to the old Pokemon RPG's' 2D style, more development in the surroundings has given it more of a 3D appearance. Furthermore, when you battle, all attacks look different than other games, and more often not they look much better. For instance, Razor Leaf is pretty much the same as the original Pokemon games, but the leaves kinda glow, they all fly at the opponent, and make cool sounds when they hit. One thing that does look kinda goofy, though, is when the camera zooms in on people (usually when they're at the bottom of the screen), their black pixels grow bigger, usually giving them wider eyes and bigger outlines.

SOUND AND MUSIC: 9/10. Whew! They finally made a change. Most Pokemon RPG's have really bad-sounding music. For lack of better words, it was kinda scratchy and bleepy. The tunes were never all that great, either. This time, though, the scratchiness and bleepiness is all gone, and the new tunes are more upbeat and sound a ton better. Even the battle music sounds way better (it was HORRIBLE in Pokemon FireRed, which had basically two instruments playing a stupid tune at the same time). There are new Pokemon, and each one has a distinct cry that usually sounds awesome (except for Bidoof--it looks goofy, it sounds even worse, with a Barney-like "Doo-DIIH!" sound with three clicks in the background). Just so you know, do NOT be expecting "Pikachu! Pikachu!" in this game. Don't expect it in any game. If you have played any Pokemon RPG at all, you'll understand that the Pokemon DO NOT say their names. They have basic, wild animal cries. Only the anime and certain Pokemon spin-offs have Pokemon that say their own names.

GAMEPLAY: 10/10. Here's where it really shines. The concepts of Pokemon are probably well-known by now, but I'll brief it for you. Encounter wild Pokemon by walking in grass and entering caves. Catch them by reducing their HP--but not down to 0--and throwing a Poke Ball at it. Battle trainers and their Pokemon along the way. Each Pokemon has 4 moves at a time, and as it levels up (grows stronger), it can learn a new move to replace an old one. Like any old RPG, buy and collect items, rudely barge into houses that ain't your own, and talk to people to gain information. Most dungeons you'll be entering into will be large and wide, often with puzzles that need to be solved to move on (in Pokemon Ruby, one was moving a couple dozen boulders out of your way strategically so you can get through). Pokemon have types, like Fire, Water, Grass, Electric, Rock, Ground, even Bug and Psychic. Pokemon moves also have the same types. If you used Flamethrower, a Fire-type move on a Grass-type Pokemon, it would inflict double the damage 'cause fire scorches grass. If you used a Water move on it, though, it would do half the damage because plants drink water. Some Pokemon have two types (although moves don't), so they can have double weaknesses and double resistances. Finally, serving as "bosses" in this game are Gym Leaders and the Elite Four at the end of the game; they have strong Pokemon that are a cut above the rest and give you Gym Badges to certify your strength. Other bosses are the commanders and leader of Team Galactic which get in your way.

AFTERMATH FUN: 9/10. "Aftermath Fun" is how fun a game is after you've beaten it, whether you start a new game or continue from an old one. If you've ready any of my other reviews, you'll be copying me when I say that. 'Cause I say it a lot. Anyway, after beating the Elite Four, catch all the remaining Pokemon! Furthermore, new legendary Pokemon become available: Giratina, the three mirage Pokemon (Azelf, Uzie, Mesprit), you name it. Go to areas you have not gone before and scout out all the remaining items. Battle every trainer. Even go down into the underground and dig up more treasures and spheres. Even if you're doing the underground without a friend, it's oodles of fun!

FLAWS: There is a very big flaw. Very big. It's the Safari Zone. The Safari Zone is an area where you can catch rare Pokemon that appear nowhere else...theoretically. That's what all PAST Safari Zones have been. They've done a twist in this game which I think is kinda cool. Every day, old Pokemon go away, and new ones appear. Only problem is, the Safari Zone is pointless now. No "new" Pokemon are there, just dime-a-dozen ones that you already caught the first five minutes into the game. There are precious few new ones; Wooper, Marill, Azurill on occasion, Croagunk (which never appears), and Scorpi (which has a very tough time appearing). As if this wasn't bad enough, there now is no difference between bait and mud (which replaces rocks), as far as I'm concerned. Both weaken the Pokemon and make it more likely to run away. The Safari Zone is supposed to be a fun place where you chill out, rack up countless items, and catch Pokemon that appear nowhere else. The magic and fun is gone in this game.

CONCLUSION: The latest Pokemon RPG for the game, and it rocks. New Pokemon, new TMs (there are now 100 in total, I think), new HMs, new places, new people. Isn't that what makes a Pokemon game fun? The only bad part, really, is the Safari Zone...but I just ignore going there.