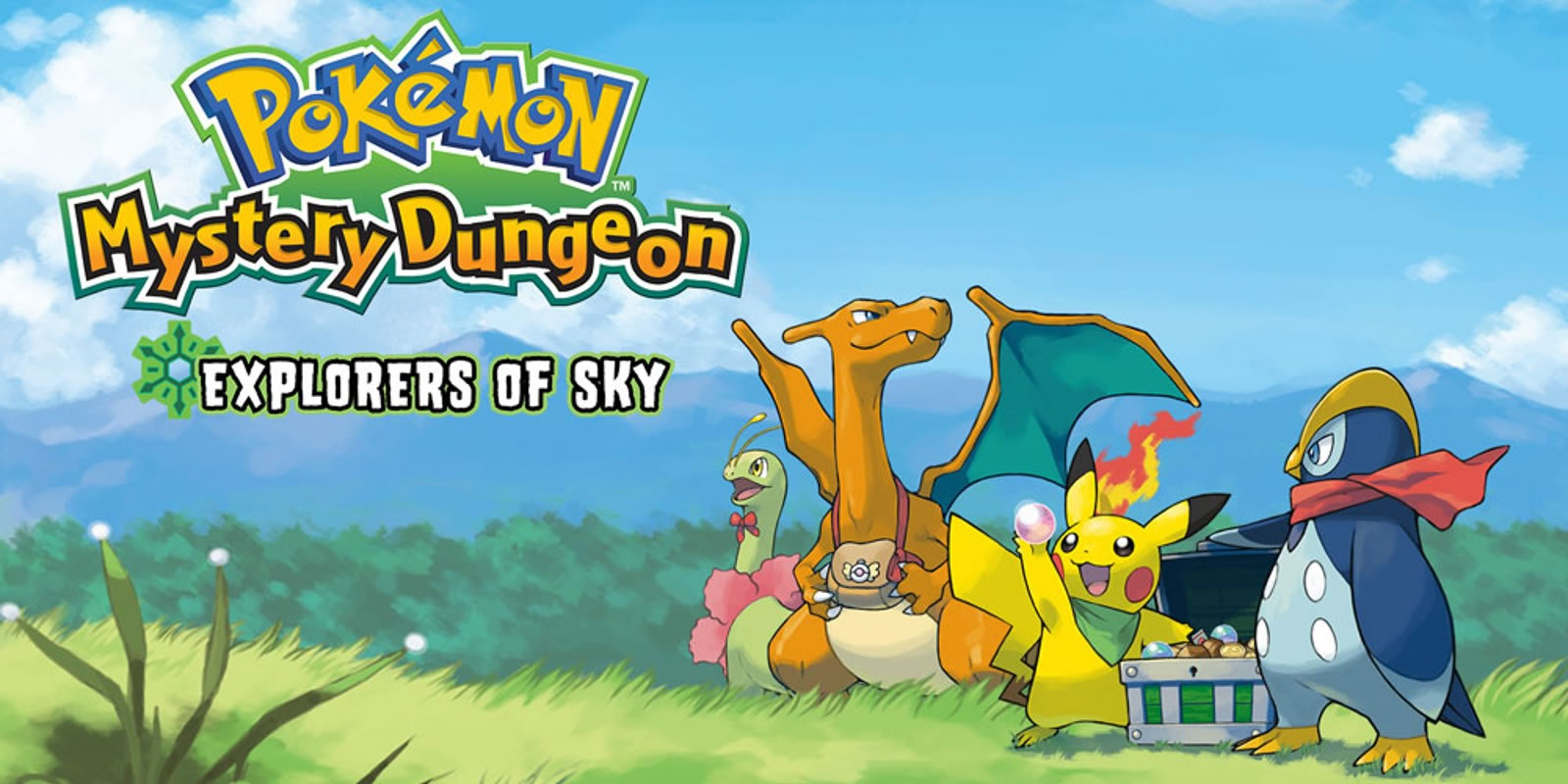 "The sky is the limit but I prefer to be on the ground."


So here we are I thought they would never do this but it happened. If you don't remember the Pokemon Mystery Dungeon series released in September of 2006 with Red on the Gamboy Advance and Blue on the DS. Then in April of 2008 we got the official DS exclusive to the series Time and Darkness. Two separate versions of the same game similar to the original Pokemon Series. I thought it would just stay at two like Red and Blue. Now we have the iconic third game making our duo a trio. As you know with most third games in this setup there are new features and improvements to add to the experience that the other games did not have. What are those new features? Well then read the rest to find out.

Story:
For me the story of an RPG is the most important aspect without a story even if the game play is exceptionally good, it just does not appeal to me(Spectrobes: Beyond the Portals is a good example of good game play with no story for me). The main plot in Sky is the same as the one featured in Time and Darkness. You’re a human who has turned into a Pokemon, you join an exploration guild with your partner and start an exploration team, you need to save the world from destruction, ect. While this may seem like a bad thing the game does not suffer from having the exact same story, as the one in Time and Darkness was exceptionally well done and thought out. However it still suffers from the same problems the previous tiles had most notably the cutscenes at the end of every day. New to the third entry is optional side stories about some of your fellow guild members which are unlocked as you progress through the story. Out of the five presented there were only three I enjoyed. Overall if you are willing to put up with the first half of the game the story is exceptionally well written and well done and will leave you satisfied at the end.

Graphics and Design:
These are the same graphics that were on the previous titles not much to be said here.

Game play and Additional Content:
If you have played the previous titles you already know what to expect this is a mystery dungeon game, also known as a "rougelike"(look up a review of Shiren the Wanderer for more info on the term "rougelike"). You will trudge through randomly generated dungeons fighting numerous enemies and beating up bosses at the end of some dungeons. I will not go into detail about what can be found in the previous games instead I will focus on the additional content for this game. First one of the problems with the first game was equipping certain items, like various stats boosting scarves; you could only equip them in Dungeons and were unequipped whenever you left them. In this game the items will always stay equipped and are equip able outside of dungeons as well. The swap shop has seen a significant improvement over Time and Darkness where in the previous titles you could only trade set items that you already had which was annoying as it was completely random to get these set items. Now you can trade a specific number of your items for a specific item chosen from a list as well as trading set items you have acquired you can also see a list of items that will work for a Pokemon in your active party making getting many of the really good items much easier. There are five new starters to choose from, Riolu, Shinx, and Phanphy are male exclusive and for female exclusive there are Eevee and Vulpix but there is that annoying personality quiz so expect a lot of resetting until you get the one you want however choosing a partner is much easier in this game as the game displays a full list of partners for you to choose. There is some extra post game content involving Shaymin and some new facilities including a cafe for stat boosting drinks, a recycle shop for acquiring certain items as well as a lottery, and a secret bazaar which can be randomly found in any dungeon. One failure from the new content is the new mail system Wonder Mail S. In the previous titles you could exchange a code for certain jobs and give them to your friends for the same rewards. The problem here is that Wonder mail S not compatible with Time and Darkness this is because Sky has certain variations on jobs that the previous games did not include, for example you find the outlaw and he runs away from you or you have to deal with the outlaw and a monster house. This is unfortunate but not severely game breaking as ignored but for those that enjoyed the previous system this can be heart breaking.. Overall there are many great new features, but Wonder Mail S is very disappointing one.

Music:
I have to say that I have a new appreciation of the music mostly thanks to the new Jukebox feature; the music fits the style of the dungeon you’re going through. There are some very good tunes in here and some that will break your heart to hear. In short the music is exceptionally well done and I am glad to have heard it.

Replay Value:
This is where game falls short for me after you clear the game and the post game story there is not a whole lot left for you to do which is sad. This game would have benefitted from a new game+ feature which would have helped to increase its game play significantly however there is no feature. As after I have finished the entire story there is not a lot I want to do after that, the dungeon crawling is the same and there is no more story to be had, aside from extra dungeons with restrictions which are really hard. If you start a new game you have to erase all your previous data which is unfortunate as you lose everything. However I do enjoy rescuing other people over Wi-Fi or through Wonder Mail so that is a plus.

The Bad:
-Dungeon crawling gets repetitive after a while
-The first half of the story is boring
-Only three good side stories
-Little incentive to replay after finishing the entire story


Rent or Buy:
To summarize for the people who have played the previous games I would recommend renting before you buy this game as it pretty much the same as Time and Darkness. But for those who would like to explore beyond the sky or on the ground whichever you prefer then this is a good game to pick up it has a very good story after the half way point and can be a lot of fun for the right person. Well I am of to see beyond the realms of time, darkness, and the sky who can say what awaits me at the end of my journey. But I know I will find the answer at journeys end.So here we are I thought they would never do this but it happened. If you don't remember the Pokemon Mystery Dungeon series released in September of 2006 with Red on the Gamboy Advance and Blue on the DS. Then in April of 2008 we got the official DS exclusive to the series Time and Darkness. Two separate versions of the same game similar to the original Pokemon Series. I thought it would just stay at two like Red and Blue. Now we have the iconic third game making our duo a trio. As you know with most third games in this setup there are new features and improvements to add to the experience that the other games did not have. What are those new features? Well then read the rest to find out.