My Pokemon Ranch Review by Morgan "The Retro Goat" Hench 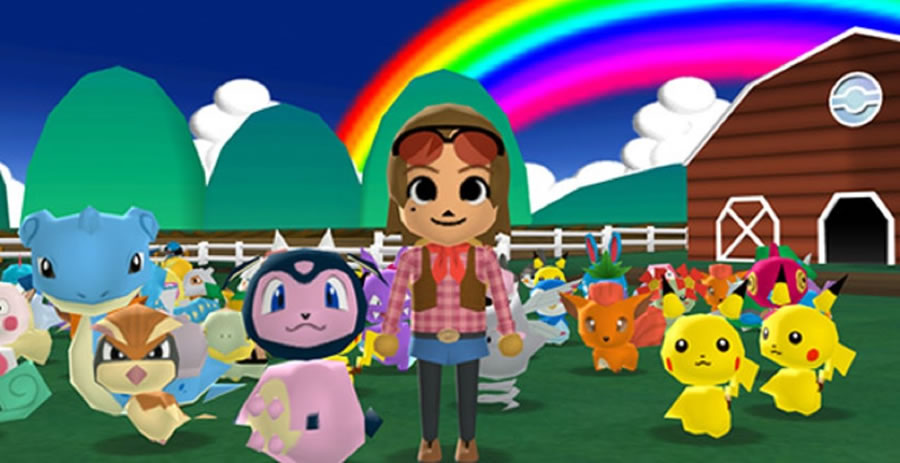 My Pokemon Ranch is, in essence, a storage for Pokemon from Diamond and Pearl. It can be considered the sequel to the past Pomeon Storage game, Pokemon Box: Ruby and Sapphire, but My Pokemon ranch is slightly more than just some storage app for your Pokemon. But only slightly more.

Story- 5/10
The story is that Hayley, the owner of the ranch, wants more Pokemon in it. She entrusts you, being the Pokemon Champion that you are, to fill it up. that's basically the premise of this game. Since this didn't need any form of story to fulfill its purpose, I will give them credit for giving us at least some little reason for it. It clearly isn't anything brag worthy, but it shows that the developers cared enough to give us even a small reason. It's better than nothing, so for that, I thank them.

Gameplay- 3/10
There are two things to do in this "game" and that is deposit Pokemon, and watch them do random things. For me personally, I can't stand just watching them play. It's incredibly boring, especially since the Pokemon don't do much. They can do random events, such as a parade, but it still is just you, the player, watching them goof off for no reason. It doesn't level the Pokemon up nor does it benefit them in any way. The gameplay boils down to the player doing something as productive or entertaining as watching paint dry. Now, there are benefits to depositing more and more Pokemon, and that is being given more Pokemon! Though most of them are just common Pokemon with a special move learned, so it's nothing to get excited about. You do get a rare Pokemon once you've deposited 1000 Pokemon, but at that point, you're just catching Pokemon to throw them into this box. I'm not sure if this game can be considered a game, since you really don't do a thing. You sit and watch Pokemon play. But My Pokemon Ranch is really just a storage system, so it can't be considered a horrible video game.

Graphics- 4/10
The graphics don't go the pixelated route of the main game, nor do they go with the pretty 3D models of Pokemon Battle Revolution. Instead they go with a bit of a chibi approach, which to me looks like a mess. They're less "cute little Pokemon graphics" and more like "polygon vomit". The best way to describe it is a crappy, watered down version of the Pokemon Channel graphics for the Gamecube, which is sad due to the fact that a Wii game shouldn't be twice as ugly as a Gamecube game. I will give them credit though for at least adding the distinction between normal Pokemon and shiny Pokemon. For those who don't know, a shiny Pokemon is a Pokemon in a VERY rare alternative color. The odds of finding a shiny Pokemon on 1 in 8,192 each battle. In other words, slim. I appreciate the fact that they added this little bonus when many players will never find, much less acquire a shiny Pokemon, so I give them kudos for that. But aside from that, the graphics are just ugly. When the entirety of the gameplay is staring at the screen while they do stuff, why not at least make it a little nicer to look at?

Sound- 6/10
In terms of a soundtrack, I doubt it can be called that. I think there are a total of maybe three songs, and only one of them will be heard frequently. They're also kiddy, which isn't automatically a bad thing, but in this case just furthers the annoyance and lessens the enjoyment (or lack thereof) of watching this game. As for the sounds that the Pokemon make? As far as I can tell, they use the correct sounds from the main games, so I can't really complain. They also at least have distinct sound effects for the miscellaneous activities that the Pokemon do, so jumping on a spring and pushing a ball sound different. It's sad that such a small thing can be considered a plus, but why expect much at this point? Overall, sound is technically the best part of this game, which is really sad, but it is barely a game.

Buy it?
It goes without saying, but My Pokemon Ranch is literally worthless to a player if they don't own Diamond or Pearl. It doesn't support Pokemon Platinum (the third game to round out the Generation IV trio) nor does it support any game released afterwards, so it is a complete waste of money to anyone without Diamond or Pearl, as they would literally be paying the equivalent of ten dollars to stare at grass. It's also worthless to anyone who doesn't really need to store additional Pokemon, so the only people who should buy this are people that buy EVERYTHING Pokemon related and people with a large amount of unneeded Pokemon that they don't want to release. It seriously isn't worth ten bucks.

Overall, this game is exactly what it says it is, a storage unit for Diamond and Pearl. If it was a true game, it'd be the worst Pokemon game ever, but it's not. It really can't be considered a game, as there is no playing involved. It does do a great job at its one true purpose of holding Pokemon, as 100 is more than twice the total amount of Pokemon in the Generation IV Pokedex (493) so it isn't a failure. It's just not a game, and shouldn't be bought for any reason other than to store spare Pokemon.

Morgan "The Retrogoat" Hench has been writing videogame reviews for around half a decade, if you enjoyed this review and would like to read some more check out his other reviews here.