How Do the Pokémon Games Compare to the Most Popular Game of All-Time?
Login

How Do the Pokémon Games Compare to the Most Popular Game of All-Time?

***
gplus
Digg
Gshare
Reddit
facebook
twitter
Pin It
The Pokémon franchise is one of the biggest names in gaming, with the likes of Pikachu, Charmander, Squirtle, and Bulbasaur instantly recognizable even to the uninitiated. Since then, the online list of monsters in the game, compiled in the Pokédex, has grown immensely, keeping the much-loved formula of the games fresh and exciting. Having launched 25 years ago in February 2021, it’s survived monumental shifts in popular entertainment, but how does Pokémon compare to the most popular game ever made?

The enduring appeal of Pokémon

Like the titular creatures of the games, the Pokémon franchise has constantly evolved with trends, technology, and player preferences. The Pokémon Company continues to find new ways to grow their non-stop merchandising bonanzas, particularly when it comes to creating new ideas for new technologies. What’s incredible about the game series is that – bar a few more recent releases on smartphones – the titles have been held to Nintendo consoles. It all started in 1996 with the very first four games in the series, Pokémon Red, Blue, Green, and Yellow, with the mainline series only recently making its debut on home consoles with Pokémon Sword and Shield. The evolution from the Nintendo 3DS to the Nintendo Switch has been well-met by players. The expansive, immersive edition moved to third of all-time generation sales in June 2020, with expansions coming out for the title since. Sword and Shield’s 18.22 million sits behind the 23.10 of Pokémon Gold and Silver and 31.38 million of Red, Blue, and Green – with all eight mainline generation games accounting for 154.86 million at the last count.

Created in 1984 by Alexey Pejitnov, Tetris is recognized as the biggest game of all-time. It has 12 years on Pokémon and has been available mostly in its basic form across almost all platforms. It most recently proved to be very popular as a battle royale-style game on the Nintendo Switch, taking the form of Tetris 99. The popularity of this recently released, subscription-unlocked form of Tetris garnered millions of account plays in just a few months: 2.8 million from February 2019 to April 2019, to be more precise. It follows the continual draw of Tetris among gamers. It’s an old game, has barely changed since its launch, and yet, even on the newest popular gaming platform, mobile, it’s immensely popular. In a total review of vintage gaming apps across the world, Tetris managed to rank second overall, ranking as the highest monthly searched title. It also gained a high score for its continued popularity trends and user rating – which put it way ahead of the likes of Candy Crush and Flappy Bird. Estimates say that Tetris has sold over 495 million across its physical and digital forms for consoles and mobiles, but the real number could be much higher. 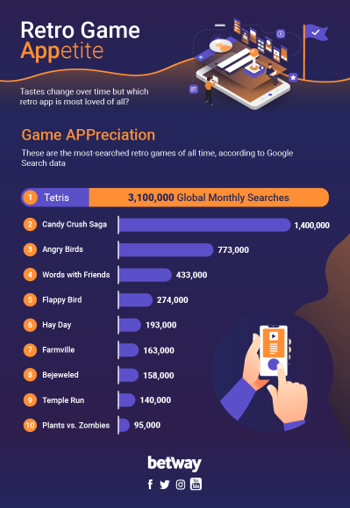 This infographic was created by Betway.

In terms of sales, the mainline Pokémon series can’t really compare to the massive sales of the mostly unchanged game of Tetris. However, Tetris can’t hold a candle to the cultural impact of Pokémon. The franchise has been a top-seller as a cinematic property, range of toys, trading card game, mobile AR title, costumes, other merchandising, and in the form of its live events.