Pokemon S1: Episode 35 The Legend of Dratini - Why it was banned
Login

Pokemon S1: Episode 35 The Legend of Dratini - Why it was banned

Pokemon S1: Episode 35 The Legend of Dratini - Why it was banned

***
gplus
Digg
Gshare
Reddit
facebook
twitter
Pin It
The Legend of Dratini was the planned 35th episode of the Pokemon Anime's first season, however things didn't go entirely according to plan with it's broadcasts, infact it was never ever aired outside of Japan. This is the second episode of the Pokemon Anime to contain banned scenes after Beauty and the Beach (Episode 18), however the difference here is that Beauty and the Beach was eventually aired in a cut down censored edition, where this one wasn't ever aired.

There were a number of reasons this episode was completely banned, and I've gotta say after less than a minute after the intro finished it became quite apparent in a kind of "lol wtf" kind of way. So without further adieu lets take a look at why it was banned.

First scene
Ash, Misty and Brock are singing about all the Pokemon they're going to catch in the Safari Zone. An old man appears who is less than impressed with their poor singing and naturally, screams SHUT UP at the top of his voice and offers to gun them down on the spot. After declining Kaiza's kind offer to shoot them, the group go inside the building with him (wtf). He prepares some Safari balls and Ash excitedly reaches for one, Kaiza sticks the gun right in his face and tells him he will follow the rules or "Thunderbolt" will get him (thats the name of his gun.). 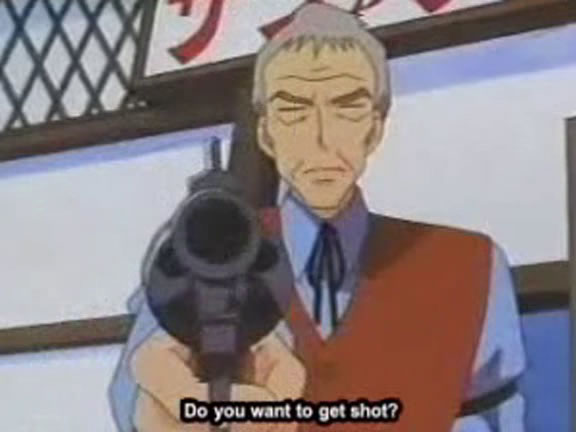 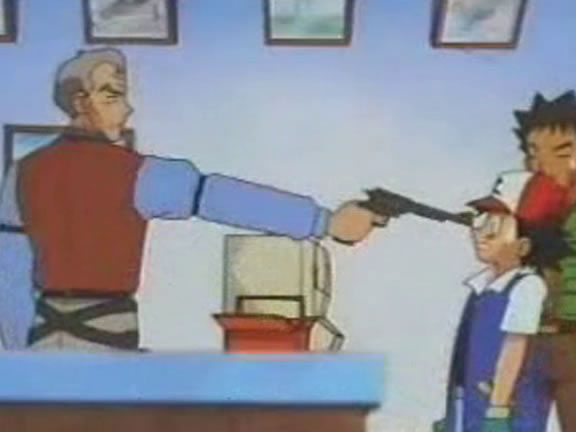 Second scene
OK, so as if that first scene wasn't enough, when the group spot a black and white picture of a young Kaiza with a Dratini they realise the rumours of a Dratini being in the Safari Zone must be true and get quite excited. Kaiza angrily snaps that there is no Dratini, Ash begins to argue that there must be because theres one on the picture, and Kaiza again points a gun immediately in Ash's face until he drops the subject for a moment.

Ash begins to talk about it again until Kaiza grasps his gun in it's holster. 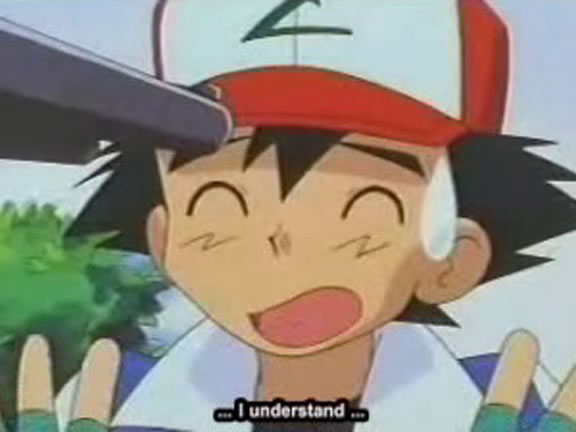 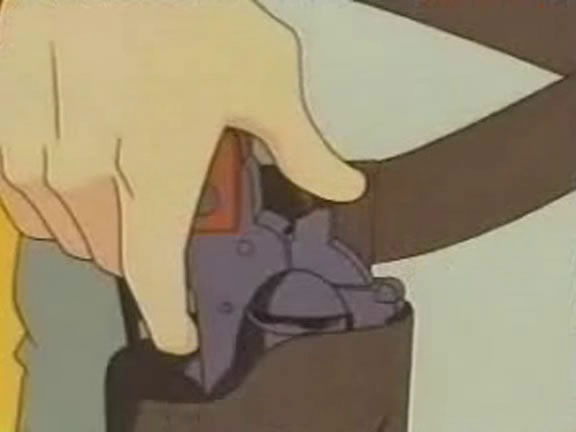 Third scene
After accepting Kaiza's rules that they are only to use Safari Balls and Rod's and not speak of Dratini the group get ready to go and catch some Pokemon when Team Rocket appear on a platform/sign above them and start doing their motto. Kaiza takes exception to them standing on his sign, quickly draws two guns and begins firing on Jessie, James and Meowth who narrowly avoid being shot. 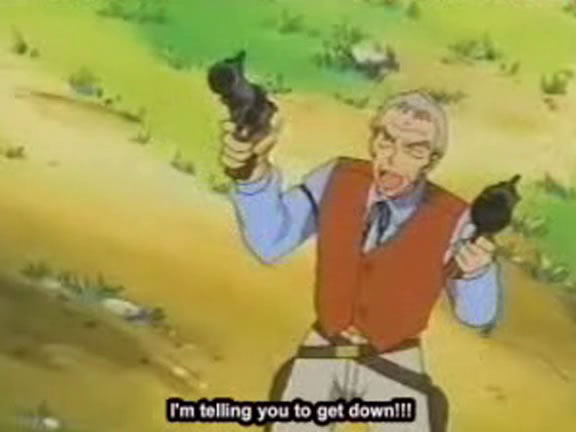 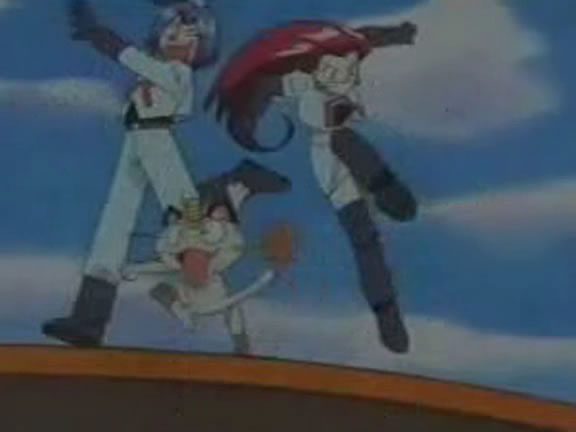 Fourth scene
While Ash and friends are off looking for Pokemon, Team Rocket take Kaiza hostage and ask him to tell them where Dratini is stating that if he doesn't "they will have to hurt him" while pointing a gun at his face. 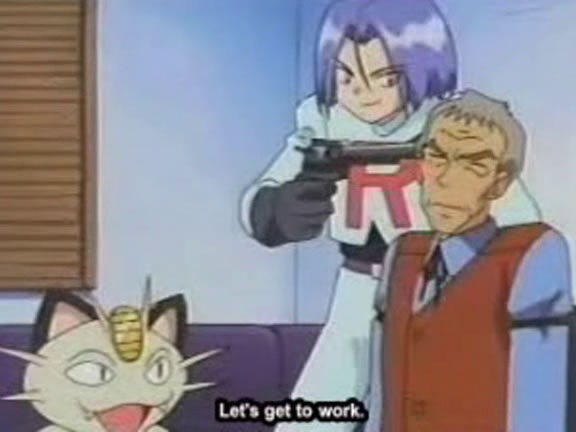 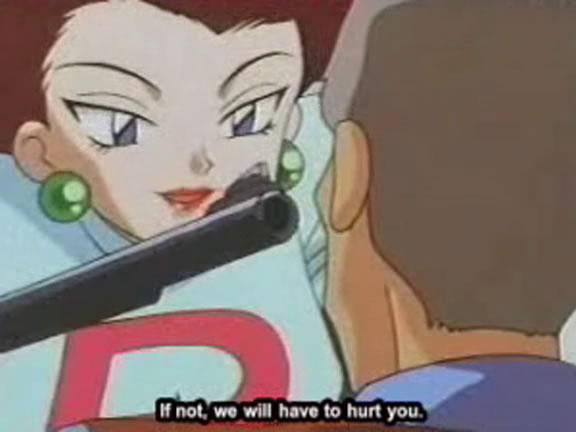 Fifth scene
This ones comparatively not too bad, but still probably didn't help too much. With Kaiza being resolute about not telling them where Dratini is regardless of their threats against him Team Rocket try a new tact; this time Jessie basically offers to "go out with him" in exchange for the information....Kaiza looks a little more tempted but still didn't give up Dratini. 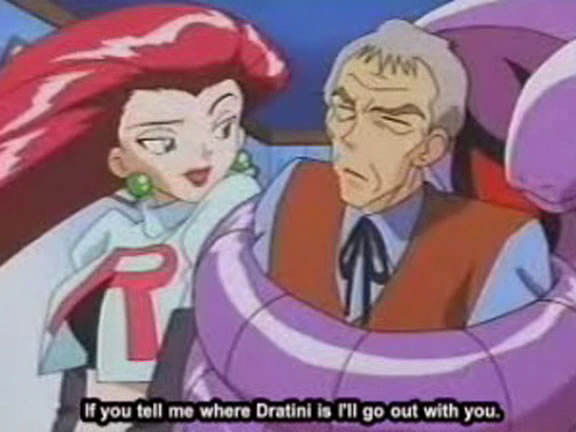 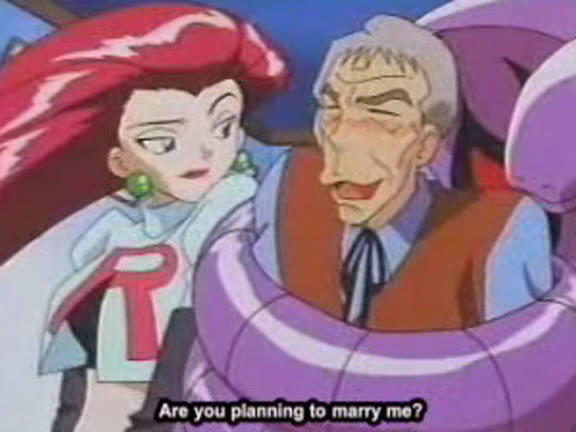 I do kind of agree with this one being banned (where I didn't agree so much with Beauty and the Beach having such a limited, chopped up airing) as it pulls no punches and flies straight in with an angry old man screaming at and threatening to shoot people.

But credit to whoever wrote it, I was laughing like crazy that they were trying to pass this for kids TV and in spite of all of this the actual story within the episode itself was really good, and quite a touching tale in the end. You can read the story on our Pokemon Season 1 page.

And now we know why The legendary Legendary of Dratini was indeed banned!