***
gplus
Digg
Gshare
Reddit
facebook
twitter
Pin It
Apricorns are pretty neat little fruits. They have two functions for ingame: creating Poke Balls and making Aprijuice. Both of these are useful in their respective areas of gameplay. But Apricorns are only available once per day, one for each Apricorn tree. Just how do you collect them?

The trees are found in many areas. You can find one just about anywhere in Johto and quite a few spots in Kanto. How will you remember them all?

Well, there's this great function in HGSS for the map application on your PokeGear that allows you to mark locations. When you first mark locations, if you're finding them on your own, travel everywhere in each region and mark every city and route that happens to have them. The marking function even gives an Apricorn marker, just so you know exactly why it's there!
If you're hoping for a list of places to find them, you're in luck. Here's where the Apricorn trees are found:

Another place to obtain Apricorns is in the Pokeathlon Dome, where you use your hard-earned points from Pokeathlons as the currency. They only have certain Apricorns on certain days, however.

Green is the most common type, and after that, Black. You may want to just buy rarer Apricorns such as Red from the Dome, as opposed to common types. 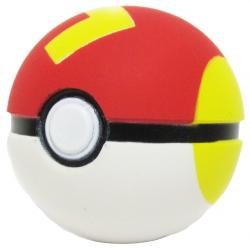 The one thing everyone knows about Apricorns is that they can be used to make unique types of Poke Balls. Just take 'em to Kurt; he'll take about a day to make them but it's well worth the wait.
Each type of Apricorn is turned into a different type of Poke Ball. You may want to stock up on Apricorns before giving them to Kurt, as there's no such thing as too many Poke Balls!

The most useful ingame are usually the Lure, Friend, Fast, and Heavy Balls. Also, they're very pleasing to the eyes as opposed to the plain old Poke, Great, Ultra, and Master Balls.

The other function of Apricorns is making Aprijuice. Aprijuice helps out your Pokemon in its Performance stats for the Pokeathlon, much like Poke Blocks for Contests and Poffins for Super Contests. Each Apricorn contributes to certain stats, except for the White Apricorn, which does nothing on its own.

Also like Poke Blocks and Poffins, Pokemon will only like certain types of Aprijuice based on their natures. Each Performance stat is related to specific flavors and in turn, specific battling stats.

Apricorns add yet another fun layer on Pokemon, especially now that they contribute to a side game. With so many uses for one little fruit, it'll be an important item to grab on your adventures in Generation IV. Be sure not to miss out on such a nifty item!