***
gplus
Digg
Gshare
Reddit
facebook
twitter
Pin It
How do competitive battlers do it? How is it that they make such great teams? Why can't I make teams like them?
These are probably many questions you've asked yourself. Teambuilding appears to be very difficult, and for good reason. It is difficult.
"Then how do some battlers have so many good teams?" Well, that's because they battle a lot. Anyway, this guide is here to get you started on teambuilding. 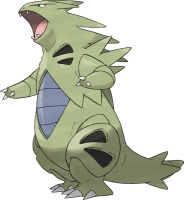 The first step to actually making your team is choosing your Pokemon. Now, don't just go off choosing whatever, or choosing only your favorites. You'll end up with a bad team most of the time. Just choose one Pokemon that you really want on your team. As a beginner, you may want to choose something OU, as they aren't so difficult to support. Since the Gen V OU metagame is so riddled with weather, we're going to go with Tyranitar.

Now, first you have to choose a set. You won't know how to support it without a set. The arguably most useful set would be the Specially Defensive Mixed set. It's very popular and supports a team in bulk and diversity.

This set's pretty damn versatile. Not only does it reliably set up rocks, but it also carries Fire Blast to burn down Skarmory, Forretress, and Ferrothorn. Not only that, but Gliscor's standard set is far from a OHKO and gets OHKO'd by Ice Beam. Dugtrio also misses the OHKO without a Choice Band, so it's Tyranitar's not going down without a fight. Crunch is just obligatory STAB, and even without investment, Psychics and Ghosts still get hit hard. The amazing thing is this set's insane special bulk. In Sandstorm, its Sp. Def. rises to 468, allowing it to even barely live unboosted non-STAB Focus Blasts, or Bulky CM Reuniclus' +1 Focus Blast.
The bane of this set is a super-effective physical attack. Almost any offensive Pokemon's EQ will KO, and Physical Fighting moves will surely KO. But this is where we start with the next step: supporting your Pokemon.

Unfortunately, being Rock/Dark leaves some common weaknesses for Tyranitar. How will it work out? Well, in competitive battling, you can't win without switching a few times. So a few of your members should support its weak points. You have five other members of your team, so use them. The first weakness is Fighting. What would support Tyranitar by resisting Fighting? For one, Reuniclus. It's sporting good HP, and because of that, it actually has decent physical bulk when invested. While a Trick Room version sounds nice, what is needed is physical bulk. This set would be best:

Reuniclus has decent physical bulk, and due to Magic Guard, it's immune to not only Sandstorm, but entry hazards as well. It can repeatedly switch in with this and Recover from attacks, all the while setting up Calm Minds and throwing powerful attacks. It can also switch into Toxic or Scald for T-tar to get statused, which is extremely useful to combat Breloom. Terrakion cannot deal sufficient damage with X-Scissor unless it boosts its Attack. If it's Choiced, it's fairly easy to deal with. If not... well we'll account for that.

This Scizor set has extreme surprise factor. Most are either Banded or Swords Dance, which means switching in on Celebi would be dangerous, as it outspeeds and hits with HP Fire. A Scarf Scizor, though, can switch in, U-Turn, and OHKO Celebi. Scizor also outspeeds base 121 (which mind you, doesn't exist yet), meaning it outspeeds Tornadus, Latios, Latias, and notably Terrakion. Among others are +1 Scrafty and +1 Tyranitar. Scizor can revenge kill Terrakion as long as it's not choiced. It also resists Grass moves for Tyranitar and Bug moves for Reuniclus.
Now we have to cover bulky Water-types. For this, we can use two Pokemon:

Rotom-W was selected because of its good synergy with Scizor and its decent bulk, along with an immunity to Ground and Volt Switch. Virizion was chosen for its wall-breaking capabilities, and it doesn't mind Sandstorm with Giga Drain.

Now that Tyranitar's covered type-wise, there should be some more utility.

Jirachi helps the team out by T-waving, which helps since Reuniclus isn't using Trick Room. It also provides big Wishes, helping Tyranitar win weather wars. Iron Head is always there just to annoy your opponent to death and Fire Punch allows it to strike Ferro and Forry when they think they're safe.

Overall, your team is:

Now that you have a team, time to go play!

This is where you find out how your team fares. Some matches it may do well, while in others it falls apart. If you actually use the team above, you'll notice it has quite a few weaknesses. It's your job to find those weaknesses and then patch them up. You may not get to use everything you want due to having these weaknesses.

These team revisions were mostly made by Celery (#72)

Virizion isn't doing much and Scizor isn't so useful. Sun is also a much bigger problem than Rain ever will be. So it's time to find something better.

Gliscor offers better overall bulk and counters Terrakion very easily. Gliscor also can break stall with Taunt and Toxic. Protect lets it scout and switch into something more useful. Earthquake of course for STAB. The EVs were shifted a little from Defense into Speed, so that it can outspeed some other Gliscors with Taunt. With Gliscor, this team now uses the Rotom-W/Gliscor/Jirachi core, which is very hard to break.

Replacing a musketeer with another! Terrakion provides strong Fighting STAB and also Stone Edge, which gives it such amazing coverage for only two STABs. X-Scissor is to allow it to catch Psychic-types, and Earthquake because it has absolutely nothing better to do with perfect 3 move coverage. Terrakion also gains a Sp. Def boost as well, which eases its switch-ins. Another thing is that Terrakion combats Sun very well, which this team has problems with.

Now that the biggest weaknesses are covered, this team's ready for more testing!

And as you test, you start to notice little weaknesses here and there. Specs Politoed and Rotom-W cause problems, and Jolly SD Lucario with Bullet Punch sweeps you.
To remedy this, you replace Reuniclus and Rotom-W with the following:

Latias provides a physical buffer by using Reflect. Due to this, Scizor and Tyranitar will not be KOing it. It outspeeds both, as well as neutral base 100s and Timid non Scarf Rotom-W.

Jellicent covers the weakness to Specs Politoed by resisting all but Hidden Power. It provides a "what-if" statement on SD Lucario: If it runs Crunch, Gliscor counters. If it doesn't, Jellicent has it. Alternatively, Gliscor can use Protect on the Ice Punch.

The thing about this step is that it can repeat indefinitely. A team can always change to account for a newer threat or to adapt to a changing metagame. Your teams may have to change a lot to be improved.

Now, after using a team for awhile, you'll probably want to build another. That's normal. Build as many as you can, and test each one to improve them. Sometimes they may not be so great, but good teambuilding is trial and error. So you're bound to have mistakes you never want to see or hear of again. Just build your teams without worry and use them as you please.

Note: The example team is a team I built with help from Celery (#72); feel free to use it, but do not claim it as yours, please.